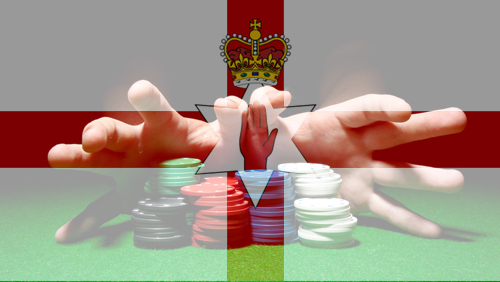 Northern Ireland is one of the very few countries in Europe that has laws in place that ban the organisation and participation of live poker games, an outdated law that needs to change.

It’s time for someone to give the sleeping lawmakers in Northern Ireland a nudge with a sledgehammer.

Christmas is a time for many things: family, turkey, and heading down to your local for the annual Christmas poker tournament. It’s tradition. It’s a great laugh. There is no harm done.

And yet, we play with the money hidden from view just in case we are raided by police because it’s illegal for us to be playing poker for cash in a pub without a license.

It’s a ridiculous law that achieves nothing but aggravation. It’s a silly law that drives people to find other ways of playing their games. The laws will never stop this from happening because it’s a form of control that’s not wanted.

But some places get it worse than most.

Take Northern Ireland as an example.

The political history of this country is complicated to say the least. I was raised English and was taught that Northern Ireland is a part of the UK. So why can I walk into a poker room, or casino, in the UK and play poker for money, but people trying to do so in Belfast over the Christmas period were raided by police and had their cash prizes confiscated by the Police Service of Northern Ireland?

We are back these draconian and pointless laws.

Northern Ireland is a part of the UK but it does retain some independence when it comes to some of their laws, and gambling falls under this jurisdiction. Whereas the UK’s Gambling Laws were overhauled in 2005, and most recently in 2014, Northern Ireland falls under the auspices of the Betting, Gaming, Lotteries and Amusements Order of 1985.

People from Northern Ireland were playing on Nintendo Entertainment Systems, watching Back to the Future and Norman Whiteside was winning the FA Cup for Man Utd.

The inconsistencies are terrible.

Just south of the border, in the Republic of Ireland, the Irish Open is the longest running live poker tournament outside of the World Series of Poker. Even in the north, people can gamble on the national lottery, bingo and place sports bets. They can also play online poker where it’s available. But playing cards in a live setting is deemed illegal.

As Northern Ireland poker player Mick McCloskey once said in a blog post written about this subject, “In my own little part of the world, I feel like I am being criminalised for playing a game that millions of people all over the world are free to enjoy.”

There are very few European countries that don’t have laws in place allowing people to play poker for money in brick and mortar establishments.

Northern Ireland is one.

We don’t have a US problem on our hands here. Instead, I think this is more about raising the issue high enough for a politician to take notice and run with it.

With this in mind, I suggest we start right now by sending this article to social media at a quickening pace.

There is a win-win here. We are not talking about nuclear weapons, terrorism or gun crime. We are talking about new laws to allow people to play a game of cards; laws that would create jobs, and generate tax for the government. More importantly, it’s about consistency. If I can play poker in a card room in England, Scotland and Wales, then I should be able to do so in Northern Ireland.