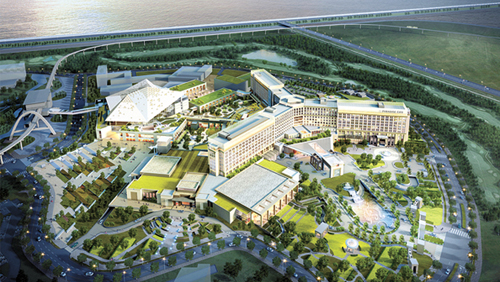 Casino operator Mohegan Sun is teaming up with KCC Corp. to build a $5 billion integrated resort complex on Yeongjong Island in South Korea.

Connecticut-based Mohegan Sun has until Nov. 27 to submit its application for an integrated resort on the island, which also houses the Incheon International Airport, according to the report.

The Ministry of Culture, Sports and Tourism started accepting in August requests for proposal (RFP) for nine sites, including Ung-dong in Jinhae Free Economic Zone of Gyeongsangnam-do, a redevelopment area in Busan North Port, Yeosu Gyeongdo Tourism Complex in Jeollanam and six sites within Incheon.

Mohegan Sun’s proposed multi-phase development will include an integrated resort near the airport, complete with casino, luxury hotel, theme park, convention venues as well as entertainment, shopping and dining facilities.

It was reported early this year that the U.S. tribal casino operator is entering a joint venture with Grand Korea Leisure for the Yeongjong Island project, but the South Korean company shut down the reports.

Had the partnership pushed through, GKL’s plans for the Incheon project would have involved 250 gaming tables, 1,500 electronic gaming machines, 1,000 hotel rooms and a 20,000-seat concert arena. GKL currently operates three small foreigner-only casinos in the country under the Seven Luck brand.

So far, there are already two approved projects for the Incheon Free Economic Zone: the Paradise City joint venture, which is already under construction, and the joint venture of Caesars Entertainment and Lippo Ltd., which has yet to break ground.