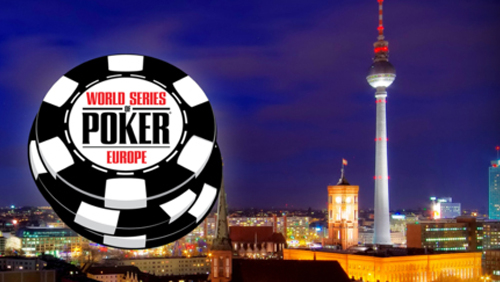 With the World Series of Poker Europe just around the corner, the team has announced plans to partner with Twitch and PokerFirma in a bid to provide poker fans with as much coverage as possible.

The deal with Twitch is more rational than revolutionary. They have become the live streaming platform of choice since Jason Somerville helped put online poker on the eSports map with his sterling performances on his RunItUp show. The WSOP, WSOPE and WSOP-APAC tournaments are amongst the highest profile in the world. The fans deserve the highest quality stream, and now they have it.

All 10-events will be streamed live on the WSOP Twitch channel. Events 1-4 & 6-8 will feature hole cards on a 30-minute delay, and Events 5, 9 & 10 will feature on the table action on a 5-minute delay. David Tuchman will handle the commentary, and he or she who busts first will no doubt join him in the booth in the role of Robin. Streaming is also available on the WSOP main site, and XPressHD will handle the workload.

Whereas the decision to broadcast their live streams on Twitch won’t raise an eyelash, the same cannot be said for their decision to offer PokerFirma the responsibility of handling their live reporting efforts.

The decision to drop PokerNews as their live reporting partner for the 2015 WSOP in Las Vegas was met by derision from almost all quarters of the poker playing community. Whilst I for one thought the in-house crew did a good enough job to continue through to 2016 and beyond – I was in the minority.

Whilst hiring a local German based media partner may reduce costs (lack of travel/accommodation), I am not aware of PokerFirma ever handling a tournament series with the prestige, punch and power as something like the WSOPE.

I imagine the WSOP got the PokerFirma deal done on the cheap, and they should use that money to hire some WSOP Twitter helpers, because the ever-critical players will have an absolute field day with this one when things kick off on the Oct, 8.

One thing that PokerFirma do bring to the party – and it’s an important ‘one thing’ – is their ability to speak and write in German. The live updates will be provided for in both languages, something I don’t think has ever happened before.

The series is scheduled to take place Oct 8 – 24, at the Spielbank Casino. Sport1 and ESPN will also do their part in the distribution of content by providing television coverage for the €10,450 Main Event and €25,600 High Roller.

There will be 10-WSOP bracelet up for grabs, and the winner of the 2015 WSOP Player of the Year will be crowned in Berlin, as none of the November Nine are within reaching distance of the top spot.

2015 WSOP Player of the Year Leaderboard