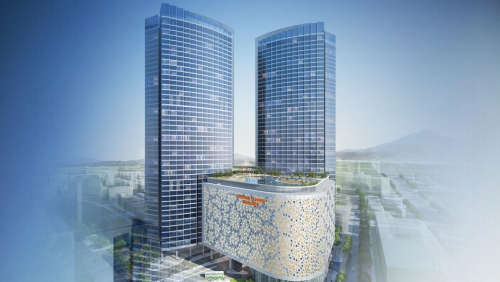 A new integrated resort could give Genting Singapore’s Resorts World Jeju a run for its money.

Lotte Tour Development Co. announced on Monday that its privately-held affiliate, Dongwha Investment and Development Co., had injected its Dream Tower integrated resort project into Lotte in exchange for 5.7 million shares valued at $85 million in total.

Dream Tower is expected to open in the second half of 2018, right behind Resorts World Jeju, whose first phase is set to open in 2017.

The Lotte project, which received construction approval from Jeju government in August, is expected to have more than 1,600 hotel rooms in two towers with 38 floors, 200 table games and 400 slot machines. Its non-gaming facilities will include 24-hour fashion and premium retail, restaurants and entertainment venues.

Dream Tower and Resorts World Jeju have yet to receive their casino licenses from the government of Korea. Jeju, however, is excluded in the ongoing Integrated Resort RFP process being run by the Ministry of Culture, Sports and Tourism because the island is considered a self-governing province and is able to run its own casino-related development program.

“We believe that the governor of Jeju intends to ultimately approve only two or three IRs in Jeju,” Govertsen explained. “Recall that immediately upon taking office in summer 2014, the governor announced he was putting the already-approved Dream Tower project plans under review—which is the same step he took in regards to the Genting project.”

There are eight small casinos operating on the island to date. Collectively, these casinos brought in about $200 million in gross gaming revenue last year, but Union Gaming analysts believe the numbers could go higher when the “high-quality” resorts open their doors.

But that’s still in the future. Today, the current GGR trends in South Korea are trending just as badly as Macau due to China’s ongoing crackdown on corruption, and the negative impact of the Middle East Respiratory Syndrome to tourism. The good news is that the casino industry is already on the mend following the deadly MERS outbreak earlier this year, but the effect of the anti-corruption drive could last longer.

Aside from Lotte and Genting Singapore, there are at least two more parties vying to get their hands on an IR license in the island. The first project, Berjaya, is currently at a standstill after residents said the land for the resort was taken from them illegally.

Another project could potentially be affiliated with Bloomberry Resorts, which have acquired one of the eight small casinos and reopened it under the name Jeju Sun Hotel and Casino. It remains to be seen if Bloomberry will parlay Jeju Sun’s license into a large-scale integrated resort development in the island.