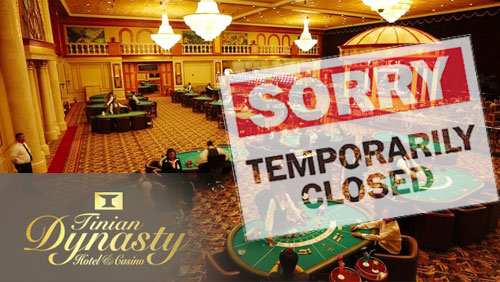 temporarily closed its casino floor in the aftermath of Typhoon Souledor.

In a meeting, Tinian Dynasty owner Hong Kong Entertainment (HKE), along with Spectrum Gaming, told Tinian Mayor JP San Nicolas that it temporarily closed the casino operation as of August 14.

HKE’s decision follows difficulties among tour operators to sell its two-island destination tour package, which includes Tinian and Saipan, as a result of Typhoon Soudelor’s recent devastation of the Commonwealth of the Northern Mariana Islands (CNMI).

The casino is also affected by charter flights being unable to land on Saipan as airports limit their operations during day time.

With the temporary closure, San Nicolas raised concerns of the ripple effect on the community, most especially the casino’s employees.

“Revenue generated by the casino operations has been a lifeline for many people who rely on the Dynasty for employment or whose employment with the municipality is supported by casino revenues,” San Nicolas said.

Chris Bishop, Dynasty acting hotel and casino manager, said that the company will provide all employees with free lodging and meals in the interim as well as issuing one pay period on Friday. Dynasty was also working to get caught up with all pay periods within the coming weeks.

In July, the Tinian Casino Gaming Control Commission (TCGCC) entered into a memorandum of understanding with HKE and Tinian Entertainment Co. to transfer ownership and operational control of HKE to TEC.

San Nicolas expressed his confidence that “TCGCC and HKE will work cooperatively towards the goal of reopening the casino operations and in the interim, execute a temporary closure plan that will maintain the integrity of the industry in the interim.”

“It is my responsibility to ensure that we have the ability to pay our employees and to continue providing essential services,” said San Nicolas. “Revenue from the casino allows me to do that. It is my hope that this closure is temporary. I ask those who will be directly and greatly impacted by this for their patience.”