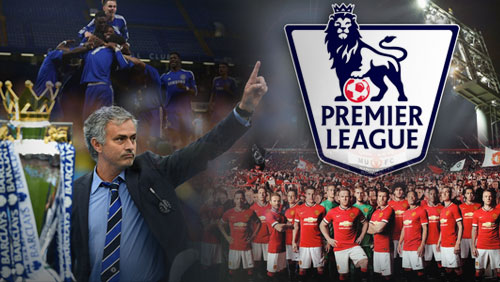 With the new Premier League season upon us Lee Davy explains why he believes Chelsea will successfully retain their title this season.

The fixture list has picked a dream tie to kick things off. Tottenham Hotspur will head to Old Trafford to get their asses handed to them on a plate by one of only three teams I believe has any chance of preventing Chelsea from retaining their title.

The match kicks off at 12.45, on Saturday, and BT Sport has the live coverage. Meaning, if you refuse to pay for sub standard BT products like me, you will have to wait until Saturday night to watch the goal glut – and there will be a goal glut – on Match of the Day.

I believe there are only four teams capable of winning the Premier League this season: Chelsea, Man United, Arsenal and Man City. I will explain why in a few sentences time. I have also added Liverpool in the mix. Although I believe I have more chance of singing a duet with Elvis than Liverpool winning the league, they have been very active in the transfer market again, so I will take a look at their chances also.

Let’s start with the marquee team. The lads in blue and white; the Russian billionaires toy: the reigning Premier League Champions Chelsea.

Let’s be honest, they won the Premier League at a canter last season. They obliterated sides when they had to, parked the bus when needed, and had more surgical precision than Dr. Kildare.

They won the title because they had the strongest spine.

Experience, strength and the forked tongue of a snake.

Chelsea is an orchestra. Cesc Fabregas is the conductor. What an influence this man is. He guides balls around the field with the precision of American sniper Chris Kyle, and he has the current PFA Players Player of the Year, Eden Hazard, bringing most of them down and banging them into the back of the net.

They retain all of their main stars. Didier Drogba has left, but was well past his prime, Petr Cech has moved across town to Arsenal but got calluses on his bottom from his bench time last season, and Filipe Luis has returned to Athletico Madrid with his tail between his legs after hardly getting a kick.

Inbound we have Asmir Begovic to replace Cech, the lightning quick Nathan – who has since been farmed out to Vitesse on loan – and the suspect Radamel Falcao who joins on loan from Monaco via Man United. Apparently, Falcao comes highly recommended after John Terry and Gary Cahill told Mourinho that he played well against them when they faced United last season. I must of blinked during those moments.

Mourinho believes they have to play better than last year if they are going to win the title, mainly because the competition has spent heavily in the transfer market. New signings take time to bed in though, and this is another reason why I believe Chelsea have the upper hand.

They have strength, skill, experience and the greatest manager in modern football. That’s why nobody else stands a chance.

With Chelsea walking away with the title it will be interesting to see who finishes second. I think it’s a toss up between Arsenal and Man Utd, with the reds winning a close run race.

Nobody held the ball better than United last season. Their possession percentage was 61.1%. Whilst it’s true that a Michael Carrick controlled midfield does have a tendency to play sideways football, it’s always better to have it than to be chasing after it.

This possession football gave United a solid look, and at times their opponent’s, including Chelsea, seemed in awe of it. If United can get the ball out wide quicker, and be a little more incisive, they can be a very dangerous team.

The additions of Memphis Depay, Matteo Darmian and Morgan Schneiderlin are great signings. Bastian Schweinsteiger is also a world class player but there are doubts over his fitness levels going into the new season. Van Gaal has also brought in the Argentinean keeper Sergio Romero from Sampdoria, perhaps in the knowledge that David De Gea will be on his way to Real Madrid.

United have allowed Falcao to move on to Chelsea, and Robin van Persie to go to Turkey. This is great news for United fans as it almost certainly means Wayne Rooney will get a sustained period of time playing up front. I also believe United will bring in another quality signing before the end of the transfer window. Angel Di Maria is no loss.

So why don’t I think they have what it takes?

When you talk about the strength of the Chelsea spine, Arsenal’s looks positively jelly like. The signing of Petr Cech from Chelsea is one of the signings of the season. Cech is still world class, and when it comes to spines, they don’t start much stronger than the man underneath the black hat. Arsenal have not had a keeper of this ilk since David Seaman’s ponytail threatened the very existence of manliness in the 1990s.

But that’s where the spine ends.

Francis Coquelin is no Patrick Vieira. He’s a great little player, gets stuck in, and makes a difference; but he doesn’t have authority. Would you be scared facing up against him? I know I wouldn’t.

It’s the same up front. Theo Walcott still reminds me of a world class sprinter who still hasn’t worked out how to play football, and Olivier Giroud is a quality player, but he aint no Diego Costa is he? Push him around and he will be worried about his quiff.

They have pace, they have class, and they will play football with all the grace and beauty of a Botticelli; but that’s not enough. They needed to bring a right horrible bastard into the midfield, and a striker who can bang in 20 goals a season. They didn’t. And that’s why they won’t win shit.

Everyone said that Man City was an ageing side last season. They creaked. They croaked. They still have most of those old stalwarts, but youth is on its way. The biggest transfer saga of the season was undoubtedly Raheem Sterling’s on/off transfer from Liverpool. He eventually moved for a deal that will be worth £50m.

Is Raheem Sterling worth £50m?

He’s a great player, and nobody likes to see him jinking down the wing more than this Englishman, but he is not the type of player to turn an ageing side into Premier League champions. He is no Luis Suarez.

The only other decent signing that City has made comes in the shape of Fabian Delph. I am a big fan of Delph and think his best years are well ahead of him. I just hope Pellegrini gives him enough games. Otherwise he could be another wasted talent moving to a big club for all the wrong reasons.

I think Man City will struggle this season. I really do.

Liverpool has no chance of winning the league. I include them because they finished runner-up to Man City two years ago – and should have won the bloody thing – and they have once again been splashing around in the transfer market with all the grace of an Elephant in a paddling pool.

Brendan Rodgers hasn’t exactly set the world alight with his signings has he? It seems he has one plan. When in doubt head to St Mary’s and pick up all of their best players. He has done it again with the signing of Nathaniel Clyne. Let’s hope he makes a better job of things than his predecessors.

The signing of James Milner from Man City is whatever, Danny Ings is going to spend the year on the bench like Rickie Lambert did, and I’m not a fan of Christian Benteke. Is he going to smash 20+ goals into the back of the net? I don’t think so.

Sterling is a loss, Steven Gerrard will be an even bigger loss, and the loss of Suarez will once again be felt as the Scousers move into their second year of life without their little vampire. If there was ever a one man team Liverpool of two years ago was very definitely it. Even Daniel Sturridge looks an average player without Chewy Suarez at his side.

So that’s my opinion: Chelsea for the title, United and Arsenal running the gauntlet for second, Man City messing about in fourth and Liverpool left dreaming about life with that little nutter from Uruguay.