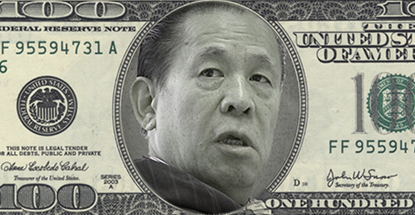 Japanese gaming firm Universal Entertainment Corp’s troubled casino project in the Philippines is back on track after firming up its local partnership and receiving permission to delay the project’s opening date.

Cojuangco’s presence resolves one of the major issues that had been blocking the project from going forward. Philippines law limits international firms to no more than 40% ownership of the land on which their projects are constructed but Tiger Resorts has had numerous setbacks in attempting to solidify its relationship with a local partner.

Tiger Resorts has since sold the necessary portion of its property stake to Cojuangco’s All Season Hotel and Resort Corporation. On Thursday, Cojuangco told reporters he wanted to help Okada ‘in any way I can” and hoped to get involved in related projects, such as improving Manila’s airport infrastructure.

BUDGET COULD RISE AS HIGH AS $4B
Okada also announced that the budget for Manila Bay Resorts would likely rise by one-third to approximately $4b. The budget boost was reportedly made in exchange for the Philippine Amusement and Gaming Corp (PAGCOR) agreeing to Tiger Resorts’ request to delay the opening of the project’s first phase until December 2016.

The Manila Standard quoted Thadeo Francis Hernando, PAGCOR’s VP for gaming license and development, saying PAGCOR’s board had approved the delayed opening request. However, PAGCOR will require Tiger Resorts to provide evidence that it has sufficient resources to make good on its grandiose promises.