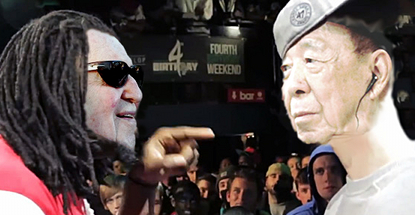 Last week, the Las Vegas Sands chairman used his Q2 results call to take a shot at GEG’s recent opening of Phase 2 of its flagship Galaxy Macau property. Adelson said Galaxy had made “an enormous mistake” with their new property, and while he declined to specify what that mistake was, he did say that Galaxy management had “little cumulative experience in their executive ranks to back up their strategic judgments.”

On Sunday, GEG chairman Lui Che Woo proved he’d make the worst hip hop MC ever by taking the high road in response to Adelson’s disrespect. Instead of pledging to pop a cap in Adelson’s wrinkled ass, Lui issued a statement saying “holding his head high to other operators in the same industry and offending others by words should not be the acts of a high-status person. Being big-hearted is a blessing for a human being.” Which was nice, we suppose, but ‘fuck off, you loudmouthed yankee blowhard’ would have said much the same in a shorter span.

Perhaps Lui was feeling a little generous given that Galaxy Macau’s Phase 2 has reportedly helped the operator gain some Macau market share. While Phase 2’s May 27 opening might have failed to live up to outsized expectations, UBS Securities analysts believe GEG’s share of the overall Macau casino market rose 200 basis points in Q2 to 22.5%, only 0.5% behind Adelson’s Sands China.

While Sands China maintained its lead by standing still, GEG’s gains are believed to have come at the expense of rivals SJM Holdings and Wynn Macau, each of which is believed to have shed 100 basis points of market share to 21% and 9% respectively. Melco Crown Entertainment and MGM China rounded out the market with 14% and 9.5% respectively.