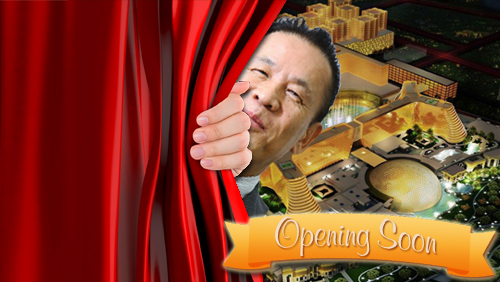 Manila Bay Resorts is nearing its completion, and Japanese billionaire Kazuo Okada is finally gearing up to open the doors of his $2 billion casino venture in the Philippines.

In fact, Manila Standard Today reported invitations were already delivered ahead of the topping off ceremony on July 30.

Okada also had to find another local partner after Universal’s original agreement with real estate developer Century Properties Group fell through. The Philippine Star reported the Japanese mogul has teamed up with businessman Antonio Cojuangco for the casino complex development.

Tiger execs initially slated the launch of Manila Bay Resorts’ first phase by the end of 2016, saying the delays weren’t really a bad thing since it would give them the time to scope out the competition.

According to a BusinessWorld report, Okada’s group requested Pagcor for an extension of the project’s completion. Tiger Resort officials said the integrated casino will be completed by the first quarter of 2017 because it plans to add 97,000 square meters to Manila Bay Resorts gross floor area.

The original deadline for the casino’s completion was in 2013, but Tiger asked Pagcor for an extension. The two parties agreed to a second date—March 31, 2015—but Tiger Resort President Kenji Sugiyama said in the beginning of March that they are “more than 50 percent complete” and would not be able to finish on time.

Aside from the six-star hotel that Tiger Resort has yet to finish, Manila Bay Resorts will also house an upscale hotel with 960 rooms and a 500-room “family-oriented” hotel in addition to two shopping malls, spa facilities, residential properties, a cinema complex, an amusement center, a concert hall, and retail and dining options, including fine dining outlets with Michelin-starred chefs from around the world.

The Manila Bay Resorts is one of the four projects at the Entertainment City zone. Bloomberry Resorts’ Solaire Resort and Casino and Melco Crown Entertainment’s City of Dreams Manila have already opened, while Genting Group and Alliance Global Group plans to open Resorts World Bayshore in 2018.