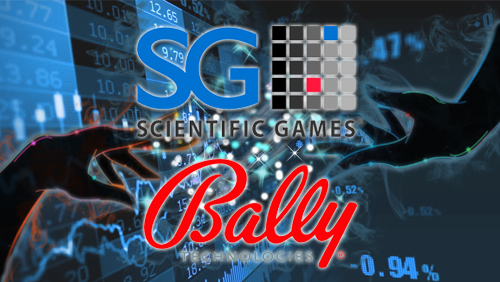 So far, not so good. The last time I covered Scientific Games/Bally was almost a year ago in September. There, I had said

Behind all the fluffy positive language of the press releases announcing this merger, a cursory look at the bottom lines and balance sheets of both companies betrays that this will most likely be a disaster. It makes me wonder if the whole deal was indeed initiated by a bag lady.

Scientific had anticipated cost synergies of about $250M. Let’s look at what’s happened as of the latest report for Q1 2015, the first full quarter since the merger was completed. Expenses for the combined company increased by 60% since Q1 2014, though revenue increased by 70%, so there is at least some efficiency gained here. The absolute numbers give a better idea. Expenses increased by $240M, while revenue increased by $270.6M. That puts net gain at just over $30M. The problem is debt. The cost of the merger was much greater, and the cost of servicing it more than eats out the $30M gain last quarter.

Debt service costs increased by 243% year over year. Once again, absolute numbers show more of what’s going on. As of last quarter, Scientific is paying $116M more in interest expense for that $30M gain. You don’t need to know integral calculus to understand that this doesn’t make sense long term. And it doesn’t look like it will get any better. The combined company has a debt to equity level of nearly 600%. Scientific/Bally have willingly enslaved themselves to JPMorgan, Bank of America, and Deutsche Bank, the three megabanks who helped financed this deal. (Which, by the way, was financed with other people’s demand deposits. It’s deals like this that, when the business cycle turns, cause systemic instability if debt cannot be serviced anymore and depositors want their money back.)

Back in September, I had also said:

Still, if the merger saves them the money they think it will, the two companies together will probably run net positive, at least for a while.

That hasn’t happened yet. We’re only one quarter in so it’s still early, but while operating income is positive at just over $18M, interest expense blew that away handily, and even with a $62M tax credit, the combined company still lost more than $86M in Q1, more than any of the previous three quarters.

What are they counting on? It’s really hard to tell. Spectacularly amazing revenue growth it seems. Revenue will probably grow, but not enough to catch up to costs. The music is still playing though and the party in the capital markets continues. Scientific is up 44% since September 23 the last time I covered them, and up much more if we count from the October low. How long can it last? Roughest estimates are anywhere from 3 weeks to 4 and a half years. Here’s why.

Let’s assume that interest rates remain at record lows for another 4 years (haha…) despite an imminent Fed rate hike. That still puts Scientific’s debt service costs consistently higher than its operating income. Let’s also assume price inflation stays extremely low for another 4 years, because if it starts rising, rates will have to rise with it. And let’s assume that somehow, the company grows fast enough to outpace its debt service costs. Still, Scientific Games has $2.2B in principle debt due in 2020, and another $2B due in 2021. This, they cannot repay without a restructuring. Scientific is going the path of Caesars. Not as extreme, but it’s headed there.

And why 3 weeks? This is not necessarily so, but US securities have a possible day of reckoning coming in around 3 weeks. Take a look at the latest money stock measures release, and you’ll notice that in the final column of table 2, the three figures above $12T occupy the first 3 rows. In 3 weeks, those numbers will be off the quarterly table, and the 13 week average two columns over will plummet if we don’t decisively break through $12T consistently in the next 3 weeks. Assuming weekly money supply stays constant by July 30, money supply will have actually shrunk on a quarterly basis.

Keep in mind that this is not a magic number game and there’s nothing inherently special about a declining quarterly money supply average that necessitates a crash. It just greatly increases the chance of one happening. And the last time money supply shrunk on a quarterly basis was the weekend of September 25, 2008. It has never done that since.

The last three weeks have been interesting though. Demand deposits have increased by $231B, but savings deposits have decreased by $292B, a net $61B loss in money supply. That tells me that savings are being moved to checking accounts for spending purposes. Does that movement hint at signs for the next 3 weeks? Possibly. Increases in demand deposits usually correspond with decreases in savings deposits. An increase in both in the same week is very rare, and that is what we’d need to top $12.1T. It doesn’t look like we’re going to make it. Not in three weeks anyway.

If it does happen in the next three weeks and it triggers a selloff, the Fed may have ironically lost its window of opportunity to raise the Federal Funds Rate as it has been threatening to do for months.