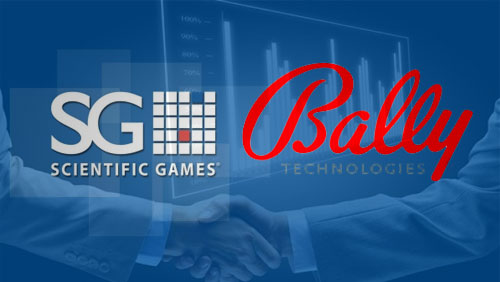 When I think of the recent merger between Bally Technologies (BYI) and Scientific Games (SGMS), my mind gets caught in the Kurt Vonnegut novel, Jailbird. The story features the RAMJAC corporation, a fictional enormous super conglomerate that pretty much owns the entire planet, and its controlling shareholder turns out to be a crazy bag lady named Mary Kathleen O’Looney. I read this before I understood the impossibility of superconglomerates owning more than 50% of any one industry let alone the planet at any one time due to economic calculational chaos, so it made a scary impression on me as if it could actually happen.

The Bally-Scientific Games merger isn’t on a planetary scale like RAMJAC, but it does seem to be full of Vonnegutian black humor. Behind all the fluffy positive language of the press releases announcing this merger, a cursory look at the bottom lines and balance sheets of both companies betrays that this will most likely be a disaster. It makes me wonder if the whole deal was indeed initiated by a bag lady.

The two companies claim the deal will help both of them through “$220 million of cost synergies and $25 million of capital-expenditure savings through consolidating operations and creating efficiencies across a range of activities.”

Yeah OK. So that’s $245M in savings a year? Let’s give them $250M and see where it gets them. In the last four quarters Scientific Games has lost $121.4M. If you include a tax credit of $129M in Q4 2013, the loss balloons to $250M. So at the current rate that Scientific is hemorrhaging and everything else being equal, the new “cost synergies” will have them at break even, plus Bally’s earnings of close to $100M. But everything else is never equal.

The deal altogether is $5.1B consisting entirely of debt. $3.45B will be borrowed from various credit facilities in a deal with all the megabanks (JPMorgan, Bank of America, Deutsch Bank), Scientific will then take on the remainder of Bally’s debt valued at $1.92B in addition to its own debt of $3.2B which will the total debt of the merged Scientific Bally to a huge $8.6B with a combined market cap of something like $4B at current stock prices. That puts debt to equity at over 200% for the merged company.

In addition to the cost synergies of $250M that this merger will help create, Scientific Games will be paying Bally’s debt service costs which in the last year have jumped to $57M from $18M last year. Bally does use interest rate swap derivatives to protect its debt, but is not clear on how much of its debt is fixed. Even if we assume most of it, Scientific, on the other hand, is quite clear. 28% (page 71) of its debt is fixed rate. That means 72% is subject to a rise in interest rates, and that is a lot. How much of the new debt will be protected? We don’t know.

Yes, all of this is included in the bottom line already. The purpose of pointing out these numbers is not to double count, but to detail the situation that will be created here. Bottom line, Bally is profitable, but losing its efficiency. Its revenue is growing nicely, but its debt service costs will keep eating at its earnings. That is mainly why, despite revenues growing 22% since last year, earnings are down 30%.

Still, if the merger saves them the money they think it will, the two companies together will probably run net positive, at least for a while. But the massive debt will catch up to them sooner rather than later, and if we are indeed near a bull market top here in both stocks and bonds, debt to equity will zoom pretty quickly and service costs will get out of hand.

If the deal is to succeed ultimately, we will need to see a fast decline in administrative expenses, a big jump in revenues beyond the sum of its parts, and some major interest rate hedging. The first two are possible, but all three together, I just don’t see it happening.

This is not the same situation as the GTECH/International Game Technologies merger. That case is almost a mirror image of what is going on with Bally and Scientific Games, the evil twin if you will. In the case of GTECH and IGT, you have one company (GTECH) that knows how to manage its debt with 85% of it protected, and another company (IGT) becoming more efficient and streamlined in its operations, shrinking in terms of revenues but improving its net earnings. With Scientific and Bally, you have one company already in a bad debt situation with growing debt service costs and 72% unprotected, taking on the debt of another company that, while growing in terms of revenue, is shrinking in terms of its net earnings.

For those excited about the merger anyway, focus in on SG&A and interest expense. If by some miracle the two companies find a way to service this merger efficiently and it really does lower their costs of doing business, then perhaps it could work. More likely than not, though, GTECH-IGT will pull away, leaving Scientific-Bally in the dust, trying to figure out how to pay for this move.