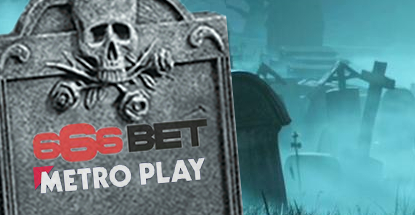 The company behind the UK-facing 666Bet and Metro Play online gambling sites is officially winding down operations.

On Monday, the Alderney Official Gazette posted a notice indicating that Metro Play Ltd., which operated the 666Bet.com and MetroPlay.com online gambling sites, had been placed in compulsory liquidation. An Act given on July 2 by the Court of Alderney ordered Metro Play to be “compulsorily wound up.”

Metro Play Ltd. had its UK Gambling Commission (UKGC) operating license suspended in March following the arrest of 666Bet director Paul Bell as part of a £21m money laundering and VAT fraud investigation. Since then, both Metro Play sites have attempted to refund player balances, but a public statement from the company in May said it needed to raise additional capital in order to make its former players whole.

Late last month, the UKGC said a Metro Play spokesman had informed it that funds would be made available to customers who had requested withdrawals. The UKGC said the spokesman had claimed that “whilst the company that provided administration and marketing services to Metro Play and 666Bet has gone into liquidation, he was not aware of any insolvency action being taken against Metro Play.”

This week, the UKGC posted a notice acknowledging the liquidation order and indicating that Metro Play’s UKGC license “has lapsed” and thus the company is “no longer licensed to provide facilities for gambling” in the UK. The UKGC added that it “does not know whether this development will have any impact on the payment of outstanding balances to customers.”

KPMG Channel islands Ltd.’s Linda Maree Johnson and KPMG LLP’s David John Standish have been appointed joint liquidators of Metro Play. All persons having claims against Metro Play have been instructed to contact the above pair no later than August 7.

According to Standish, the liquidators’ priorities are “to secure client monies, collate and examine the company’s books and records, and determine any further lines of enquiry. We encourage creditors to register their claims with us and also provide any relevant information they have which may assist our enquiries.”