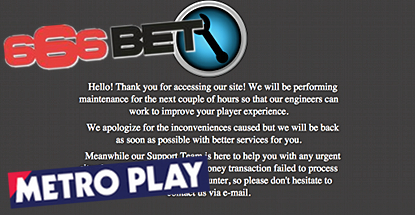 The UK Gambling Commission (UKGC) has temporarily suspended the operating license of Isle of Man-based 666Bet.

On Friday, the UKGC posted a notice saying it had “commenced a review under section 116 of the Gambling Act 2005” of the license held by Metro Play Limited, which covers both the Metroplay.com and 666bet.com sites.

The review was necessary because the UKGC suspects that Metro Play Ltd. is “unsuitable to carry on the licensed activities (section 120(1)(d) of the Act) and considers it appropriate to suspend the license with immediate effect pending the conclusion of the review.”

The UKGC said the license suspension was “an interim measure, the need for which will be kept under consideration whilst the review takes place.” In the meantime, the UKGC ordered Metro Play Limited to settle any outstanding winning bets and return any outstanding balances to customers.

Both the 666Bet and Metro Play sites currently display a message indicating the sites will be “performing maintenance for the next couple hours so that our engineers can work to improve your player experience.” The message states that the sites “will be back as soon as possible with better services for you.”

On Friday, 666Bet’s official Twitter feed said the site was down “due to unforeseen circumstances.” On Saturday, the feed apologized for the “continued downtime” and advised that the site would “announce very soon how to withdraw funds.”

666Bet’s last bout of sustained downtime occurred shortly before Christmas as the company migrated its operations to a new BetConstruct platform following a dispute with its former platform provider Novigroup. Prior to the switch, 666Bet customers had flooded forums with slow-pay complaints, leading the company to switch payment providers. Since the year began, 666Bet CEO Barry Martin stepped down to join KPI Gaming Consultants, although he continued to advise 666Bet.

666Bet launched last June and quickly made a name for itself by inking a host of high-profile betting partnerships, including English Premier League clubs Leicester City and West Bromwich Albion, plus a half-dozen non-league English clubs and boxing cards.