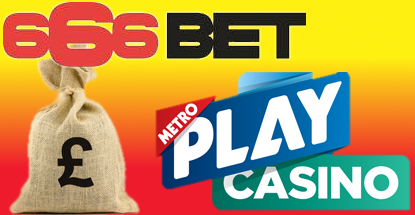 Upstart online gambling operator 666Bet has pushed forward with its plans for world domination by acquiring the operations of Metro Play, the iGaming arm of UK newspaper publisher DMG Media. The former MEcasino site was rebranded as Metro Play last year, but DMG’s inability to carve out a sufficiently large slice of the UK’s online gambling market reportedly pushed the company to shed its gambling division.

The Isle of Man-based 666Bet intends to maintain the Metro Play brand, although Metro Play’s staff will not be joining 666Bet’s payroll. 666Bet is keen to add new verticals to Metro Play’s casino offering and reportedly plans to migrate its own sports betting operation from its current Novigroup provider to the EveryMatrix platform, which powers the Metro Play site.

As part of the deal, 666Bet will enjoy discounts on advertising with DMG Media properties, despite the fact that DMG’s Daily Mail paper routinely accuses online, land-based gambling and even social gaming operators of pretty much everything except the Kennedy assassination.

666Bet only made its debut in June of this year, but the site quickly made a name for itself via a flurry of high-profile betting partnerships with English Premier League (EPL) clubs Leicester City and West Bromwich Albion as well as League One side Leyton Orient. 666Bet also signed QPR manager Harry Redknapp as spokesman and enlisted Lock, Stock and Two Smoking Barrels actor Vas Blackwood as TV pitchman.

666Bet isn’t done getting free with its investor’s checkbook, as CEO Barry Martin told eGaming Review that the company was talking with “four or five” parties about possible acquisitions, including some “big names.” 666Bet acquired Metro Play’s Alderney gaming license as part of the acquisition but 666Bet has also applied for a UK Gambling Commission license to ensure compliance with the UK’s new licensing regime.