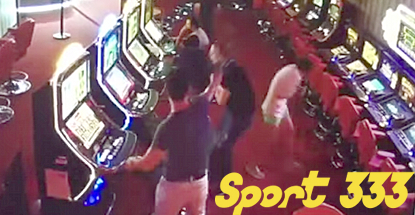 A manager of a Spanish gambling hall has been shot in the head twice by a customer, and the whole shocking episode was caught on the hall’s security cameras.

The incident occurred early Wednesday evening at a Sport333 gambling hall in the Barcelona suburb of Santa Coloma de Grament. According to local television reports, the unknown gunman was playing one of the hall’s gaming machines when he asked to see the manager. Following a brief conversation, the gambler pulled a pistol and casually shot the manager in the head.

The video shows the manager instantly falling backward onto the floor with his arms still folded across his chest. Most of the other customers in the immediate vicinity flee the scene, except one either very confused or very brave punter, who sticks around until the gunman points the pistol in his direction.

The gunman can be seen bending over the fallen manager’s body to deliver what he presumably intended as a coup de grace shot. The gunman then appears to aim the pistol at his own head, but the gun either jams or is out of bullets, at which point the gunman drops the pistol and runs away.

Amazingly, the manager survived his wounds and was taken to Barcelona’s Vall d’Hebron hospital, where he was listed as seriously injured but conscious. Police have launched a dragnet in the hopes of apprehending the gunman, whose whereabouts and identity remain unknown. Raul Claramunt, president of the GrecoJoc association representing Catalonian gaming operators, expressed his sorrow for the manager’s plight and solidarity with all gambling hall employees.