Home / Casino / Trump Plaza could be shut down for 10 years 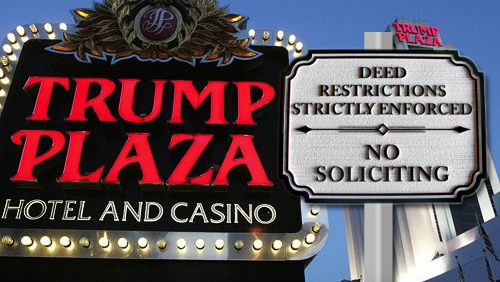 The restriction prevents any buyer from opening a casino on the Atlantic City property for the next 10 years unless the buyer is willing to pay the unspecified “release fee” to cancel the restriction.

One of the bills, the Casino Property Taxation Stabilization Act, attempts to stabilize the city’s tax base by allowing its eight remaining casinos to make mandatory payments instead of property taxes for 15 years.

Under a new PILOT program, casinos would pay $150 million for two years, compared to the current total casino property tax levy of $210 million, and future payments would be based on their gross gaming revenue rather than their property valuations, which have been falling as casinos challenge their tax assessments in court.

Trump Plaza, which closed in September 2014, operated for 8½ months during 2014, and the company feared it might be included in the alternative tax program.

“The Plaza could be required to make mandatory payments under the PILOT program notwithstanding the fact that it generates no revenue and its hotel rooms are closed,” the company wrote Friday in its filing with a Delaware bankruptcy court. “The PILOT program applies to casino gaming properties that are ‘not subject to recorded covenants prohibiting casino gaming.'”

Caesars Entertainment placed a similar deed restriction for its former Showboat Casino Hotel before shutting it down in August 2014, to keep it out of the state’s alternative tax program.

The bankruptcy judge is expected to approve the restriction on July 9.