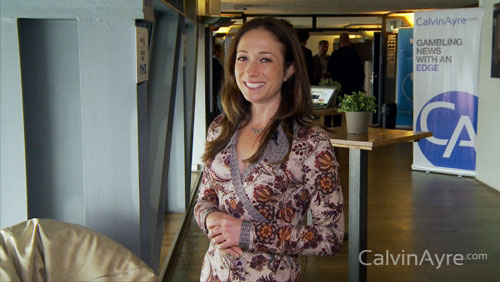 The CalvinAyre.com team returned to Amsterdam Noord’s Pakhuis de Zwijger this morning for the second day of Gaming in Holland 2015.

Willem van Oort, the main man behind Gaming in Holland, was pleased with the turnout this year with over 200 people in attendance. The sessions were well attended and productive, plus he added a series of demos on day two allowing service providers to showcase their goods to prospective Dutch clients and others.

Today’s “Mobile Gaming” panel featured mobile industry heavyweights Johan Stryen, CEO of LeoVegas and Rogier van den Heuvel, VP Benelux & Nordics at mGage. With 2014 being regarded as the year for mobile, both panelists provided facts and figures to emphasize the importance of mobile, discussed current and future projects and talked on innovation in mobile gaming.

“Mobile is the most disruptive technology ever. No technology has impacted us like the mobile phone”, said van den Heuvel.

Mobile has taken over desktop and according to research on mobile usage in the Netherlands, when asked what would they rather live without instead of their mobile responses were:

These figures are certainly fun, but they also support the importance of a focus on mobile in iGaming and in so many any other industries globally.

Styren founded his online gambling company LeoVegas with a “mobile first” focus and has enjoyed great success since its launch. So why is it possible to create this kind of business on mobile? One of Styran’s slides illustrated what people use mobile phones for…you would think calling would be at the top of the list, but its not:

Users want entertainment, so that is what LeoVegas will give them. He also explained casino gaming has gone from a niche product to more of a main stream product with the spread of internet and mobile, at the same time becoming more socially acceptable.

LeoVegas is good at converting social gaming players to real money and converting customers who have never gambled online before into real money players. “Its simply more fun to win for real”, he said.

Google made a change to their algorithm back in April, now taking mobile pages much more into consideration. Styren said this move of Google’s was great for his business from many perspectives- finally the affiliates are starting to focus on mobile and regarding mobile as an area to focus on, he said. In fact, the industry as a whole is almost forced to focus more on mobile.

van den Heuvel agreed with Styren and added it was a huge step when Google made their change in April- it proves to the tech world that mobile is here and now- its important.

When asked about innovations in mobile and what to expect in the future, Styren mentioned the Apple Watch and said its more of an add-on to the mobile phone rather than a switching of a platform, but its still certainly something to consider. He said LeoVegas will use the Apple Watch as another channel to reach customers.

van den Heuvel said wearable tech and virtual tech will change a lot in the iGaming industry. He specifically mentioned Oculous Rift and how groundbreaking the technology really is- “its still early days but will definitely influence our lives”, he said.

Sargeant kicked off the session with a slide listing the top 10 perceived start-up cities in the EU:

in’t Veld talked on the start-up friendly atmosphere in Amsterdam, with numerous and accelerators and incubators creating a “very strong atmosphere of innovation”. Her hope is to rise to the number two spot, just under London who Amsterdam considers a “big brother” when it comes to start-ups.

She went on to explain a lot of starts ups and tech companies like the village feeling of Amsterdam as it encourages crossover between different starts ups and different companies. Her plan is to encourage more incubator events in Amsterdam and travel around the world to educate start-ups on why Amsterdam is an excellent location for their business.

The issue of regulation hindering innovation in iGaming and other industries was also discussed. Sargeant said “Regulation and iGaming innovation don’t go hand in hand” and “if you can’t test it, you can’t regulate it”. Rutherford said regulation is to blame for great ideas missing the market over the past three years.

In Amsterdam, of course we’re waiting for iGaming regulations to solidify, but hopefully they won’t be too restrictive and iGaming start-up companies could potentially find a nice home in Amsterdam.