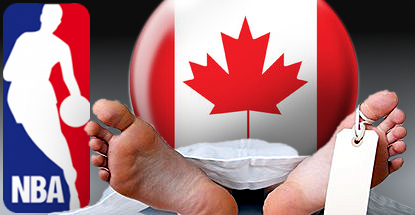 The National Basketball Association has dropped its opposition to Canada’s bid to legalize single-game sports betting, but it’s a case of too little, too late.

On Monday, the Canadian Gaming Association (CGA) released a statement urging the Senate to pass the C-290 sports betting legislation they have so far declined to pass for the last three years. Parliament breaks for the summer next week and there’s an election in October, so any legislation that doesn’t pass will have to start over from scratch in the House of Commons.

The CGA release included the following “NBA Statement to the Senate of Canada’s Legal and Constitutional Affairs Committee, June 2015:”

“Consistent with the NBA’s current position regarding legalizing sports betting in the United States, the NBA is no longer opposed to legalized sports betting in Canada as long as there is an appropriate legislative framework that protects the integrity of the game under strict regulatory requirements and technological safeguards.”

So far, no such change of heart from the NFL, Major League Baseball or the National Hockey League. In February, NHL deputy commissioner Bill Daly confirmed that sports betting is something the league does not favor. This month, NHL commissioner Gary Bettman said the league didn’t want fans rooting for their favorite team to lose because they’ve got “another agenda.”

C-290 would amend Canada’s Criminal Code to repeal the restriction on single-game sports betting that is loathed by both Canadian bettors and provincial lottery monopolies. The monopolies have long chafed at being limited to parlay sports wagers while internationally licensed online sportsbooks offer a vastly more expansive wagering palette.

C-290 has had two of three mandatory readings before a vote can be taken but senators have balked at pushing it over the finish line. Senators have voiced a multitude of reasons to justify their inertia, likes fears of potential social harms, but mostly because C-290 passed the House of Commons on a Friday afternoon by a voice vote after minimal debate, so democracy is over.

Conservative senator Bob Runciman told Sportsnet.ca that this latter view was “an argument that I don’t accept, but in any event, it’s out there, and some senators are hanging on to it.” Last month, Runciman told CBC News that opposition to C-290 was widespread but the bulk of the resistance came from within his own party. Runciman would like to see C-290 pass into law but said he’d be “surprised if it happens.”