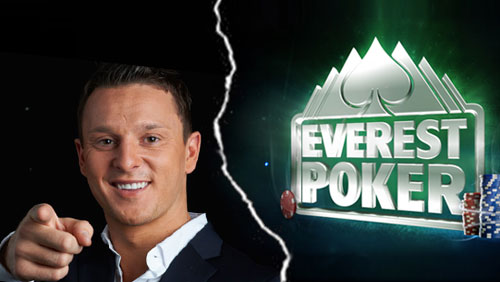 Europe’s number one money live tournament money earner, Sam Trickett, has left Everest by mutual consent, after his one year deal reached its conclusion leading up to the 46th Annual World Series of Poker.

Sam Trickett is back on the market.

The European all-time live tournament money earner, and sixth worldwide, has decided to leave his sponsors, Everest Poker, after his one year deal expired on the eve of the 46th Annual World Series of Poker (WSOP).

Trickett joined Everest Poker in March 2014. The new partnership nearly got off to a dream start, when he came close to walking away with a World Poker Tour (WPT) title, in his first event. A narrow heads-up defeat against Andrea Dato, in the WPT Venice Main Event, preventing a fairytale start.

A decent trip to the European Poker Tour (EPT) in Vienna followed, with cashes in both the Main Event and High Roller, before also cashing in the EPT Grand Final Main Event in Monte Carlo.

Then came the 45th Annual WSOP.

Trickett and his sponsors created an innovative deal that would see Everest players receiving a 10% investment in Trickett’s WSOP earnings. Sadly, Trickett’s series was marred by illness and injury, as the Retford lad was in and out of hospital with food allergies, and a laceration on his foot. He would cash in two events, and exit in a much talked about hand against Daniel Negreanu in the Big One for One Drop.

“Sam’s time as the sponsored pro with Everest Poker was one which saw some real highs for us, both as an online poker room and fans of the game,” said Dave Bland, Campaigns Manager for Everestpoker.com. “Our players had a really unique way of enjoying Sam’s progress at the World Series of Poker last year through our ‘Share 10% of Sam’, and Sam has been an exemplary ambassador for our brand. We’d like to thank him for his contribution to Everest Poker in the past 12 months and we’re really looking forward to a summer with some exciting news just around the corner.”