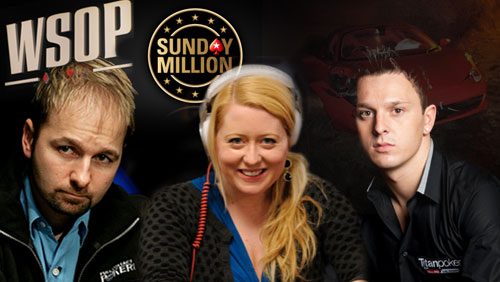 A triumvirate of news stories including Sam Trickett’s accident in his Ferrari; Katie Dozier getting upset with PokerStars and Daniel Negreanu asking if it’s possible to ban certain players from the World Series of Poker?

What a week it’s been for Sam Trickett.

He flunked the PokerStars Caribbean Adventure (PCA); likewise at the Aussie Millions, and then lost a ton of money on the Superbowl after a Pete Carroll last minute call that still infuriates him to this day.

Could things get any worse?

In a recent interview with yours truly, I asked him to choose his three most prized possessions. They were his house, his dogs and his Ferrari.

Whoops! During that same interview Trickett once again talked about the Daniel Negreanu slow roll at the Big One for One Drop. It’s still a sore point. Kid Poker must be a fan of his work.

@Samtrickett1 how are you running? Looks like me slow rolling you is the least of your worries these days! 🙂

Should the WSOP Ban Certain Players?

Sticking with the Canadian, and this week he used his personal blog to throw an interesting question out there.

“Should certain players be barred from the WSOP?”

Six members of the poker community were picked out for intense scrutiny. Howard Lederer and Chris Ferguson received reprieves of varying natures for their roles in the Full Tilt debacle; Annie Duke and Jeffrey Pollack were singled out for the part in the demise of the Epic Poker League, and Russ Hamilton and Mansour Matloubi were outed for their use of God modes to cheat people out of millions of dollars.

Of the six people, Negreanu went on the record to say he would only have a problem facing Russ Hamilton and Mansour Matloubi.

So should the WSOP institute a ban for certain players?

Whilst I err on the side of forgiveness, I do think a ban would serve an important purpose. These six people have a lot of enemies. They have ruined a lot of lives. I may offer forgiveness. Plenty would like to take their heads off. A ban would not only protect the integrity of the event. It would protect the health of the cheat.

Will it ever happen?

Poker doesn’t have a system in place to prove guilt. How can it instill a system to penalize?

Katie Dozier is Not Happy With PokerStars

Katie Dozier is a long time customer of PokerStars.

When Black Friday sunk its teeth into the necks; bleeding them dry, she was one of the grinders who emigrated in order to maintain her profession. PokerStars is home for Dozier.

But that doesn’t mean they don’t piss her off from time to time.

In a blog post entitled: “An Open Letter to PokerStars”. Dozier has criticized Stars for moving the date of the Ninth Anniversary Sunday Million from 8 March to the 15 March.

Dozier points out that Stars have used International Women’s Day as a justifiable reason to switch weekends, whilst completely disregarding the importance of Mothers Day on the new date of the 15th.

“Of the 45,000+ anticipated players in the event, do you really think such a sizeable fraction actively celebrate International Women’s Day?”

Now let me be clear. I am not laughing because the day is irrelevant. It’s important to celebrate femininity. But to move a tournament because it clashes? Don’t make me laugh.

“Because I’m an optimist, I want to believe that the reason for doing this doesn’t involve the concern of missing a massive guarantee and needing to find an excuse to push it back a week in order to run more satellites.” Dozier wrote.

The irony is extended as Dozier points out a series of lackluster attempts from PokerStars to drive female poker players to the site. Criticisms include fewer women’s tournaments and satellites, limited participation by PokerStars Pros in the $55 Women’s Sunday, and the visibility of cobwebs surrounding the PokerStars Women section of their website.

I am sure PokerStars are listening.