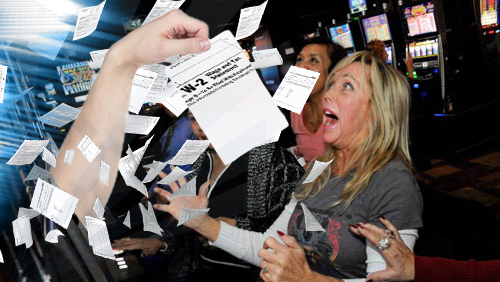 The US gaming industry has until June 2 to respond to an Internal Revenue Service (IRS) proposal to reduce the casino reporting threshold to $600.

The IRS proposed the $600 threshold in March to bring slot winnings in line with the reporting requirements of business and trade revenue and because technological advances have made tracking winnings easier.

The current reporting threshold for slots winnings of $1,200 and $1,500 for Keno took effect in 1977. Some critics of the idea have questioned why the level isn’t being adjusted for inflation, which would reset the amount to nearly $4,700.

Once you win more than the threshold amount, you will be forced to stop playing and the venues — video lottery terminals (VLT) true odds video poker, slots at racetrack venues, bingo, or Indian casinos — are responsible for making the player fill out an IRS tax form.

According to players at Pennsylvania’s SugarHouse Casino, filling out the form took about five minutes but the gaming industry warns that the interruption could eat away casino profits as gamblers will spend more time filling out W2-G forms and less time playing.

“At SugarHouse, about 1,700 people each month fill out W2 forms after winning $1,200 or more. Under the proposed rule, that number would grow to 10,000 a month,” said SugarHouse General manager Wendy Hamilton.

Analysts and casino operators agreed that the proposed rule change would affect casino profits in states with casinos.

“Not only is the casino not getting paid, but the state is losing money, and so are our local governments,” said American Gaming Association spokesman Chris Moyer. “It would be detrimental to local and state governments and the revenues they receive from the gaming industry.”

A spokesman at Penn National Gaming, owner of the Hollywood Casino at Penn National Race Course, told The Inquirer it would suffer a loss of 5%, or $6.5 million, in local and state tax revenue while Morowitz Gaming Advisors LLC analyst Cory Morowitz said that the proposal “will have real costs to the gaming industry.”

“Slot revenues are already declining across most markets and properties,” Morowitz said. “This will only make matters worse.”

In addition to the Explanation of Provisions for the proposed rule change, Keno players would be able to deduct the amount wagered on the winning game before reporting a “profit” of $600, however, slot and bingo players would not have that option. The rule change would only apply to electronic games and mechanical slot machines would still have a hand-pay threshold of $1,200.

The public and industry have until June 2 to make their opinions on the matter or appear at a hearing in Washington D.C. on June 17th, before the final decision is handled internally by the tax agency.