Lee Davy goes off on a father like son yarn after a week that sees 16-year old Mick Schumacher win his first Formula Four race, and Phil Hellmuth and his son Phillip both cash in an event at Sugarhouse Casino. 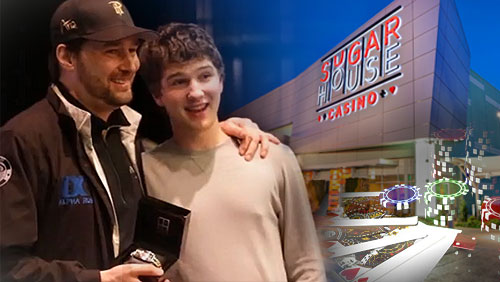 As a father, I spend most of my time gently nudging my teenage son around all of the Sarlacc’s that I fell into when I was his age. It’s not easy. A combination of hormones, and any confidence you have injected through their early years, creating a stubborn, unbreakable resistance.

Of course, what you are really doing is trying to help them become as perfect as humanly possible. You want them to imbibe your greatest qualities, launch from a foundation of your values and beliefs, and drop all the crappy parts that you have been trying so hard to shed for so many years.

My boy is 14-years old, and I am 40-years old. In two years time he will be playing senior football. That’s when I plan to make my comeback. There’s something sentimental about playing competitive football with my boy. I’ll take the kicks for that. I’ll let kids run rings around me for that.

I’ve seen something similar this past week.

16-year old Mick Schumacher may never get the opportunity to race against his father Michael. A career ending head injury has more than likely put the kibosh on that dream. But it hasn’t stopped the kid wanting to be a chip off the old block. They look alike, their first names are even alike, and after this weekend we know that they both drive alike.

The son of the seven-time Formula One World Champion, won his first race this weekend. He got his first champagne soaked spray. Let’s hope he didn’t swallow any of it. It was the first time Schumacher Jr. had raced under his real name. Previously, when go-karting, he used his mother’s maiden name to avoid the inevitable media exposure that will now stick to him like a rash for the rest of his career.

Formula One is a tough sport. The rewards are magnificent; the tragedies all too apparent. What is undeniable is the influence that his father had on his son. If he can become half as good as his Dad was, then he will be a revelation.

Our own game isn’t one where you hear about too many father-son connections. The most obvious being the Doyle/Todd Brunson link. Between the pair, they have won millions, but you imagine Todd’s decision to become a professional gambler might not have been the career path that his father may have original foresaw.

It reminds me of my own dreams to play football with my son. I imagine it would be a cool experience, just like the great man says. If you are Phil Hellmuth’s son, and you look at the life his father has lived, why wouldn’t you want to follow the same route through life? But would the 13-time World Series of Poker (WSOP) champion want his ‘cool experience’ to expand beyond that?

Only Phil Hellmuth has the answer to that question. But imagine the possibilities. Let’s go back to the beginning of this rant. Our jobs, as parents, are to raise our children in a way that imbibes our qualities, and eliminates our fallibilities. A young, tilt free, Hellmuth, without the moaning and groaning, is an exciting proposition. Perhaps, that type of kid could even surpass his father’s amazing achievements?