Home / Business / Zynga to lay off 18% of workforce, shut down sports games 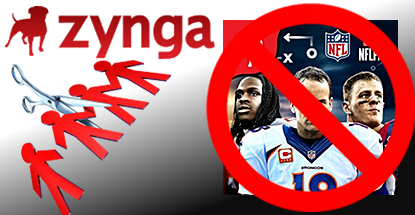 Struggling social gaming company Zynga says it will cut 18% of its workforce in a bid to return to profitability.

The company announced the layoffs in tandem with its Q1 earnings results. Total revenue in the three months ending March 31 rose 9% to $183.3m and the company narrowed its net loss by nearly one-quarter to $46.5m.

The company expects the layoffs to eventually generate savings of $45m per year, although there will be up to $22m in restructuring costs in Q2. At least, that’s the plan. Zynga previously cut 520 staffers back in June 2013, which obviously proved insufficient to stop the firm bleeding barrels of red ink.

Bookings, i.e. gamers’ purchases of virtual goods, rose nearly 4% to $167.4m. As testimony to Zynga’s efforts to wean itself off its former desktop dependency, 63% of overall bookings came via mobile devices, an improvement of 84% year-on-year. Mobile daily users rose 18% while the mobile monthly audience rose 29%. Advertising and other revenue fell 1% to $35m.

The Zynga Casino franchise saw bookings rise 55% year-on-year and 14% sequentially. Zynga Poker accounted for 19% of online game revenue while Hit It Rich! Slots added another 16%. Bookings for slots titles were up 368% year-on-year thanks in part to the new Wizard of Oz Slots title. Among non-casino games, Farmville 2 accounted for 20% of bookings and Farmville 2: Country Escape added 15%. All told, Zynga gets 70% of its bookings from just four titles.

Looking ahead to Q2, Zynga is projecting revenue in the range of $175m to $190m on bookings of between $145m and $160m. The quarterly net loss is expected to come in somewhere between $50m and $54m, which gives Zynga roughly another 21 quarters before it completely exhausts its current $1.1b cash pile.

The markets enjoyed Zynga’s decision to swing the layoff axe, as its shares closed out Wednesday’s trading up 4.4% to $2.61. The shares are up another 5% in after-hours trading.