Home / Sports / Weekly Poll: “What will be the result of Mayweather-Pacquiao Fight?” 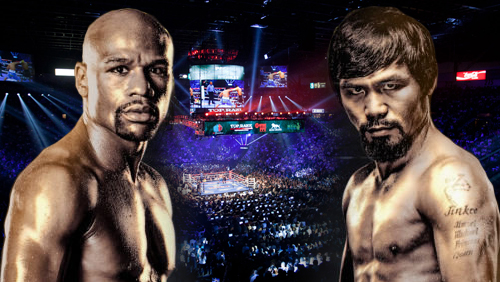 The fight of the century is just few days away. After five years of will-they-won’t-they, Floyd Mayweather and Manny Pacquiao will finally face off on May 2 at the MGM Grand in Las Vegas.

As the big fight approaches, we wanted to ask our readers who they think will win, which is why we decided to ask, “What will be the result of Mayweather-Pacquiao Fight?”

23% of our readers are rooting for a Pacquiao-Decision and 12.5% are probably asking for a miracle voting for Mayweather KO/TKO and 5% for Draw.

Most boxing experts and analysts are backing Mayweather Jr. but the public and some celebrities are firmly behind Pacquiao.

P Diddy is backing Mayweather to get the job done over Pacquiao—to the tune of $250,000— with Mark Wahlberg taking the other side of that action.

Oscar De La Hoya, a common opponent of both Pacquiao and Mayweather’s, thinks while Pacquiao can make things interesting, he’s expecting a Mayweather win, however, Mike Tyson said that “Floyd has never been tested and is going to be hit and hurt more than he has ever been before.”

Setting aside the data, the odds and the skills, here’s what some of the CalvinAyre.com staff think.

Editor-in-Chief Bill Beatty says, “My heart says Pacquiao but my brain says Floyd but the cynic in me says this fight will finish in a draw. It’s taken years to get these two generational boxers in the ring, both sides are going to make hundreds of millions of dollars so why call it a draw then they can do it all over again in September.”

“Mayweather will win, but it would be great to see Pacman knock the arrogant little tosser on his ass.”—Lee Davy, poker writer

“Manny Pacquiao will definitely win this. The match will be stopped during Round 8!”—Carl Rivera, marketing executive.

“Pacquiao all the way.  Or maybe I’m just saying that because I have a lot of Filipino friends.  Regardless, in my 36 years of life I have never seen such a big deal made over one particular sporting event globally…I so wish I was still in Vegas for this!”—Becky Liggero, reporter.

“If this was 5 years ago, Manny Pacquiao will win. Mayweather is a great defense fighter and his clever and sharp moves, combined with his size and hand speed, will outmatch Pacquiao’s power punches.”— Gabz, web marketing supervisor

Writer Peter Amsel says, “Analytically, I’m picking Floyd to win, because he’s got more to lose than Manny. Emotionally, I’d prefer a Pacquiao victory, because Floyd can come off as a bit of a douche. Secretly, I’m hoping it ends in the first round, just to piss off all the people who paid bazillions to sit ringside.”

Next week, we ask, “Has Paddy Power gone too far with their recent ad campaigns?” as Irish betting operator has once more waded neck-deep into controversy with an IRA-themed billboard promoting the Republic of Ireland’s upcoming marriage equality referendum. Join our poll, leave your comments and be heard, and check back next week to see the result.