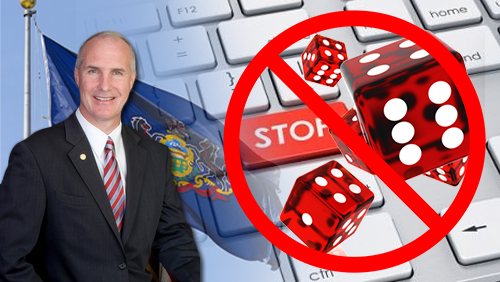 State Rep. Thomas Murt filed House Bill 1013 on Monday, with seven co-sponsors, in support of an online gambling ban within the state.

In December 2014, Murt had stated he would be reintroducing Rep. Paul Clymer’s HB 1404 from two years ago.

Containing the same language, HB1013 would prohibit the Pennsylvania Gaming Control Board (PGCB) from creating rules and regulations that would allow online gambling.

The bill also prohibits any individual or business from taking part in wagers online with a specific prohibition on collecting cash or any currency form, keeping other options such as Bitcoin from being used for online gaming.

Penalties for violating the ban would include a $300 fine for the first offense, $600 for a second offense and as much as $2,000 and up to one year in prison for a third offense.

Murt’s two-page bill is simple: online gambling will not be allowed in the state should HB 1013 pass.

Pennsylvania casino to host a public hearing for online gaming

Meanwhile, Mount Airy Casino Resort will host a public hearing for online gaming held by the House Gaming Oversight Committee on Tuesday, focusing on how to keep the state’s casinos competitive.

The hearing is at 2 p.m. at the casino at 312 Woodland Road in Paradise Township.

“Internet gaming is a growing business. Right now, millions of Americans, including many Pennsylvanians are playing games of chance online.” said Payne. “We’re not going to stop it. By legalizing it and putting rules in place, you’re protecting the player and generating revenues.”