Home / Poker / Can a Computer Solve No Limit Hold’em? 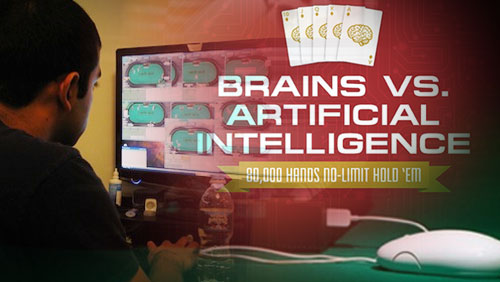 4 of poker’s most talented Heads-Up No-Limit Hold’em players are locked in a battle of Brains v Artificial Intelligence as computer scientists use poker as a way to improve the world.

In 1957, Herbert Simon and Allen Newell, two jewels in the crown of Artificial Intelligence development, predicted that within the next 10-years a computer would beat the best player in the world at Chess.

In 1997, IBM’s Deep Blue beat the World Chess Champion, Garry Kasparov (31/2-21/2). Thirty years had passed since the two experts had made their bold predictions.

Even the smartest people in the world get it wrong.

Reading that Doug Polk, Jason Les, Dong Kim and Bjorn Li were readying themselves for a battle dubbed: Brains vs. Artificial Intelligence I was intrigued. When I learned the quartet would be squaring off against a computer called Claudico, playing 80,000 hands of Heads-Up No-Limit Hold’em I got a little worried.

The whole world is already aware that a computer can beat Limit Hold’em – but No-Limit? The belief that a machine could never find a seat in poker’s Cadillac, made anyone affiliated with online poker breath a little easier. The last thing we need is a world that knows that a machine can beat the most complicated game that we have.

Claudico was born in Carnegie Mellon University (CMU). You could call Sandholm it’s father. The event will operate over a two-week period. Each player will square off against Claudico for the duration of 20,000 hands per player. All matches will be streamed on Twitch.

The event has received some interest from a heavy hitting non-poker entity with Microsoft sponsoring the event and contributing to a $100,000 pot that will go to the four players to cover their costs.

Rather ironically, Claudico is Latin for limp, with Sandholm telling the press that the players may find this experience ‘like playing poker with an alien.’ The computer earned the name after it picked up the limping strategy as a great tool, rather than the much-maligned impression it’s garnered within the poker community.

Polk thinks it will be a good thing to play against a computer. He told the press that the removal of human mind games means he can play a more ‘pure game’.

‘I won’t have to worry about if he thinks that I think, etc.” Said Polk.

At first I wanted the humans to win. I don’t want to worry that a machine could be taking my online poker winnings, and the likes of Sheldon Adelson certainly doesn’t need more ammunition.

But there is a moral side to the tale. Scientists aren’t beavering away in their laboratories designing ways to cheat online poker players out of millions of bucks.

“These algorithms we developed are really for use in any game of incomplete information in general, from cyber security, to negotiations, to medicine.” Said Sandholm.

One day I am sure it will.

The doomsayers believe it will happen sooner, rather than later, and if the world becomes a greater place as a result of a machine that one-day destroyed the online poker industry – then so be it.

Post Article Note: It seems the humans took the lead after the first day of play.

Ended today like -70k but the humans are up like 145k overall, pretty good day but a lot of work to go. #BrainsVsAI