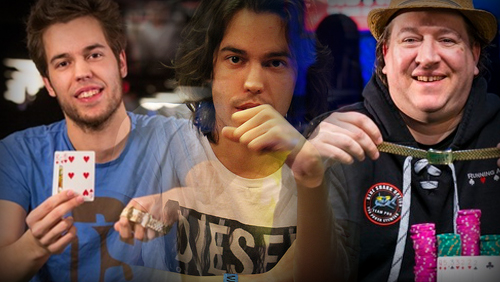 Three very different WSOP gold bracelet winners to celebrate and we will start with a man that I believe has the capability of breaking all sorts of WSOP records: Dominik Nitsche.

The skinny German has just won his third bracelet, in as many years, and his second of this season, after overcoming 2,043 players in Event #21: $1,000 No-Limit Hold’em (NLHE).

It’s the second time Nitsche has taken down a WSOP $1k event; the first coming the very first time that Nitsche was old enough to play poker in the greatest series in the world. He also won the recent WSOP National Championships in Atlantic City, and finished third in last seasons World Series of Poker Europe (WSOPE) Main Event.

Nitsche defeated the Day 1 chip leader, Dave D’Alesandro, in heads-up action, but it was an incredibly tough run down with the likes of Timothy Adams, Mickey Petersen, Jason Senti, Thayer Rasmussen, Erwann Pecheux and Jeff Gross all making it to the final 21 spots.

“I am super excited right now. It always feels good to win a tournament, especially here in Vegas, and when you have your friends around. Luckily I was able to win some all-ins and take it down.” Nitsche told PokerNews after his win.

“A bracelet is something special, It doesn’t’ matter if it’s my first, second or third. Second place would have hurt me because I really want to win. Maybe one day I can catch Hellmuth. If I keep this up who knows?”

I for one believe he has the ability, age and desire to do that.

“The next tournament is always the next goal.”  Said Nitsche.

When I was providing material for Poker Pro Europe I never managed to get my photograph in the front of the magazine as a ‘contributor.’

A photo of The Fox was in every magazine.

The contributor turned champion. I like the sound of that.

It was his first gold bracelet, and his biggest win by a country mile, and what an event to win. The prestigious $10k H.O.R.S.E Championship.

Wallace has just proven that he can’t just write good poker strategy, he can lay it out in front of you at the table, and he has over half a million points for proof.

“It’s the most fun I have ever had playing poker because the field was so tough. It was a great challenge, and tons of fun. When you are playing a $200 HORSE event at the Nugget, everyone is complaining, and I didn’t hear that once today. The pros just handle themselves differently and it was so much fun.” Wallace told PokerNews after his win.

Now that’s what I call a tough field.

Doug ‘WCGRider’ Polk is the latest in a long line of online legends who have started to try their luck in more live tournaments, and his victory in Event #23 is a great example of that faith being paid off.

It must have been tough, for a man who plays for millions online; to flick in the $1k in a Turbo event, and compete against 1,472 players, but there was no sweat on the t-shirt of WCGRider.

The online genius overcame a final table that contained the WSOP bracelet winner, Tony Gregg, and captured $251,969 for his win, which is about enough to cover one hand of poker when he gets back down to his online cash game action.