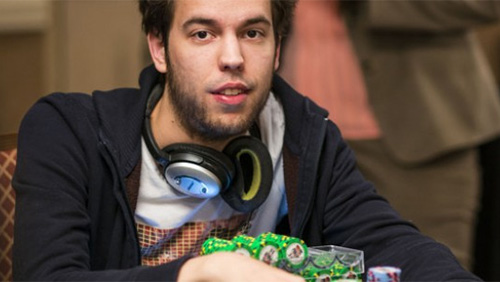 Lee Davy sits down to talk to Dominik Nitsche just 24-hours before he wins his third World Series of Poker (WSOP) bracelet to talk about how he manages to carve his way through these huge fields.

In my first European Poker Tour (EPT) event in Vienna, I asked one of the PokerNews bloggers to point out some of the people who I should be writing about.

One of those people was this scruffy looking kid called Dominik Nitsche.

“He is a really good player. Keep an eye on him.” I was told.

For the past four years.

I have seen him grow as a man.

So when I interview him, and hear him make reference to the ‘the young Internet kids,’ I think he has earned the right to separate himself from the pack. Not only should his game be respected, but his views on the game should also be respected.

When I sat down to talk to him there are still 23-players left in Event #21: $1,000 No-Limit Hold’em (NLHE), and I don’t think either of us is under any illusion that he will be the last man standing.

A day later and Nitsche has indeed won his third WSOP bracelet, in as many years. Phil Hellmuth told PokerNews that he is planning on winning 11 more bracelets; and Phil Ivey has also made mention of his plan to create a legacy laden with bracelets.

I have one of my own.

Dominik Nitsche will have more bracelets than Mr. T by the time the next decade is over with. The man is that good. The man is ruthlessly dedicated to poker. The man works harder on his game than anyone.

We have all seen him smiling – bracelet in hand – but what was going through that Einstein like noggin just 24-hours previously?

“I have no idea? I guess it’s a combination of run good, and playing better than all of these people.

“Today, I have to be honest, I played a lot better than my opponents, but I also got lucky with my table draw. I had a draw with very weak players on my left, so I could just keep min raising, whenever it was folded to me, and the cards were hitting the muck before I had even put my chips in the middle.

“If you get a table like this, you have to take advantage, and if you are a good player you will recognize these opportunities to chip up easily. And that’s how I did it today; It’s not always that easy. In tougher tournaments you are going need to win more flips, and get it in bad sometimes, and then win, but today there was not a single hand that I had to get it in bad or anything. I just kept chipping up.”

During my recent interview with the WSOP bracelet holder Craig McCorkell, the young Brit told me that he believed Nitsche was the ‘Phil Hellmuth’ of the modern age.

“I have a lot of respect for Craig and so it makes me happy to hear that. I guess he is saying I exploit weaker players like no one else, and I guess that’s true if you see what I have been doing today.

“Sometimes I know when the circuit regulars try and spew it off to me, because they think I am crazy, or they hate folding to me because I am some young kid from Europe. I don’t know what it is, but I just know when they are about to go off, and that’s a useful skillset to have.

“I guess that’s sort of how Hellmuth does it, so it’s a very nice compliment. I still don’t think I am as good as Hellmuth, when it comes to beating weaker players, I have a lot to learn.”

He looked so calm and collected, which is how it should be considering he has been in this spot before, more notably when he won his first bracelet two years ago.

“It feels alright actually. I can tell some players are starting to get nervous, and they are making a lot of silly mistakes that are completely unnecessary. Right now, we have been playing short handed for a while, and I was aggressive and raising a lot. Now it’s going to be a lot tougher. My good friend Thayer {Rasmussen} is there and he’s not going to make it easy for me. My plan is to play my cards, and if I get an opportunity to raise, I will raise. I will do what I always do – let people go crazy and make mistakes. “

Two people who are not sitting at his table are Timothy Adams and Mickey Petersen. He must be glad about that?

“I am kind of happy with my table draw. I have a lot of respect for both Tim and Mickey’s play. Having them away from me, at this stage, is very crucial. It allows me to get away with a lot more things.

“If I was on a table with Mickey, or Tim, then chips are going to fly in, but if I am playing against some American guy, who is in his 60s, I am not going to 3B call him with jacks for anything less than 15bb, because I don’t think he is going to get it in with worse, so I will be calling a lot more, playing smaller pots, and hopefully that will get me to the final table with a solid stack.”

McCorkell was not only telling me that Nitsche was a great player. He was also telling me how he would like to see changes made to the structure. I asked Nitsche for his opinion.

“He’s right, they do go to quick, but who do these events cater to? They cater to the casual player who comes in over the weekend, and they want to be in the money and need to be in work the next day. They need a fast tournament, so the amateur’s can take fewer days off work.

“Whilst I agree that the structure is out dated, in a way, I don’t think they are too fast. We just need to change them in a different way. We need antes earlier and more chips to play with. Having 3x stacks is silly, but they do need to be somewhat Turbo otherwise how do you finish a 2,000 player tournament in any reasonable time? That’s what the WSOP is, and I think they do a good job.

“You just have to play. If I am playing this tournament, the structure is the same for everyone else, and you still have an edge against people. So use that edge. You gotta keep playing, and if you play enough, one day you will go deep – that’s the key to tournaments.

“There is even value in the 25/25 level. In this tournament I was already up to 10k, and had busted two people, by the time the blinds were 25/50. I had 20k chips by the time the antes came in. You have to be there to take advantage of these easy situations. You don’t have to be bluffing anyone. You can’t afford to miss out on any value bets. If you flop a good hand you should be betting big and not third pot, third pot, third pot like some of the Internet kids do. If you are playing against an old guy who’s sitting there with top pair, and is never folding, then you have just missed out on a very crucial pot in the tournament. If you can exploit the weaker players in the tournament you will get deep in these things.”

I chuckle as he refers to people as ‘Internet kids’. A sign of the maturity that Nitsche is exuding in, and around, the poker table.

“I have been playing poker for 7 years now, and I’m not like most of these people my age. They get emotional and try and get into these huge ego wars…and Dominik 3B my UTG raise and now I have to pile in ATo…and then go home. These people think they have to do these things, which are in my opinion, completely unnecessary and no way can you back this up with any solid poker strategy. When they think they need to do something, because they think I am doing something, they are not playing solid poker anymore.

“I feel like a lot of tournament poker is just playing solid poker, and if you do that you will do well.”

And didn’t he do well.