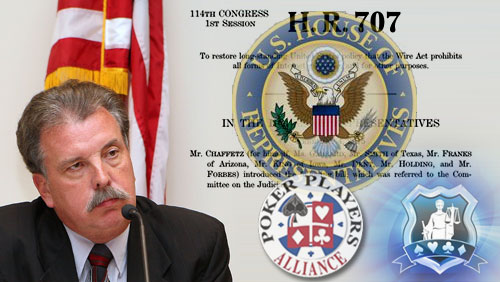 The Pennsylvania House Gaming Oversight Committee has urged congress to oppose the Restoration of America’s Wire Act, by passing HR140 ahead of crucial iGaming talks set to take place on Thursday of this week.

The state of Pennsylvania is not prepared to stand idle in the battlefield as Jason Chaffetz and Sheldon Adelson pelt them with hypocritical rhetoric. The men and women of the House Gaming Oversight Committee have their shields raised, have dipped their arrows in tar, and are preparing to fire.

In late February, Representative John D. Payne, penned a house resolution designed to urge the Congress of the United States to place HR 707 (Restoration of America’s Wire Act (RAWA)) in the trash, along with any other pieces of legislation demanding States right to rule their own roost is taken away from them.

The resolution was given the name HR 140, and this week the Gaming Oversight Committee gave it the thumbs up by 18 votes to 8. It’s a morale boosting victory for Pennsylvanian iGaming advocates readying themselves for the crucial hearings planned for April 16 and May 6.

Payne believes the implementation of RAWA would rob his State of crucial revenue, and job opportunities, that a fully regulated iGaming industry could deliver. The resolution was also steadfast in its opinion that poker would never die; instead players would seek to play on illegal sites.

The news comes less than a fortnight after Representative Tina Davis became the third politician in Pennsylvania to release an online gambling bill. HB 920 promised to deliver a large slice of iGaming revenue to the aid of the State’s senior citizens, included the opportunity to discuss interstate and international compacts, and was remiss of any mention of bad actors.

The next step in the Pennsylvania iGaming process will be that crucial hearing on Thursday, 15 April, where John D. Payne’s HB 649 will be subject to critique.

More people thrown out of RAWA meeting than were allowed to stay
Steven Stradbrooke
7 October 2015
.