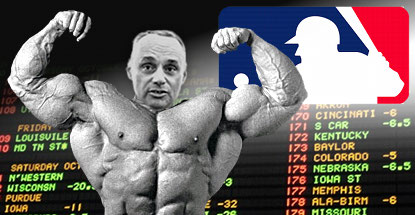 Commissioner Rob Manfred (pictured) appeared on CNBC’s Squawkbox program on Friday, shortly after the announcement that the league would prohibit its players from participating in daily fantasy baseball contests that involved the chance to win a prize of some value.

Manfred told CNBC that there was a “line in the law” that distinguished fantasy sports from traditional sports betting, referring to the fantasy sports carveout from the 2006 UIGEA. Manfred said MLB had carefully studied the issue before getting into bed with DFS provider DraftKings. Manfred went on to say that DFS was “really, really important to us in terms of engaging young people.”

Manfred defended the league’s steroid policy, saying it had been formulated following lengthy negotiations with the players’ association. At present, MLB players caught taking steroids, growth hormones and the like face suspensions of 80 games for a first offence, a full season for a second offence and a lifetime ban for a third transgression.

Manfred believes “the rule on steroids probably should not be quite as strict” as the punishment for betting. Manfred said the gambling prohibition “is so fundamental to the integrity of the game that it should always stay where it is.” Kernen countered by saying betting on baseball didn’t automatically equate to cheating, but “when you juice, you’re cheating the minute you start doing it.”

As for Rose’s chances of reinstatement so that he can take his rightful place in the Hall of Fame, Manfred would go no further than to say that he would give Rose “a full opportunity” to plead his case.

So there you have it, kids. The message MLB wants to communicate to the youth of America is that betting on yourself and your teammates to outperform your competition is a far greater crime than pumping your body full of illegal substances with a litany of known side effects in order to obtain an unfair competitive advantage. So God bless America and let’s inject two!