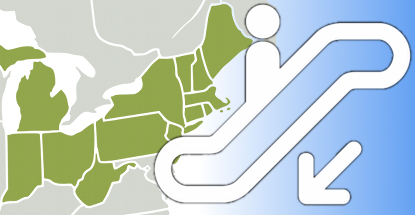 The figure is up nearly 17% from the same month last year and $800k more than November 2014’s previous high-water mark. But the four casinos that were open in March 2014 saw revenue fall 14.8% year-on-year. In fact, those four casinos have seen revenue fall every month since September, the first full month of operation at the new Horseshoe Casino Baltimore.

In Pennsylvania, slots revenue at the state’s dozen casinos hit $207.7m in March, down 3.9% from the same month last year. Only three casinos – Sands Bethlehem, Valley Forge Casino Resort and Lady Luck Nemacolin – posted year-on-year gains. Market leader Parx Casino was down 2% to $32.6m, while Sands Bethlehem was up 2.4% to $26.2m.

In New York, the Empire State’s nine racinos reported revenue of $1.905b in the 2014-15 fiscal year that ended March 31. The figure is down a modest 0.4% from the previous year, but it’s the first annual decline since the gambling joints opened a decade ago. Only two racinos – Resort World New York and Batavia Downs – posted revenue gains last year. and Worried observers are already fretting that the party is over, especially with new resort casinos set to open in 2017.

We finish on a rare positive note in Ohio, where the state’s 11 casinos and racinos set a new revenue record in March. The gaming joints collectively took in $145.6m, up from the previous monthly high of $135.4m in December. The four casinos reported revenue of $72.9m, second only to March 2013’s $84.3m, back when there was only one racino operating in the state. The seven racinos earned $72.7m, up from the previous record of $64.7m in December.