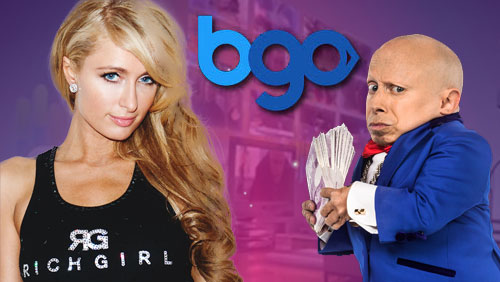 The ad is set to go live in May and follows on from the hugely successful campaign launched in November in which social media star Dan Bilzerian joined the cast.

Paris Hilton said “I’m pleased to be part of the new bgo.com advertising campaign and to be working alongside Verne Troyer.  The project is really exciting, I can’t wait for everyone to see it!

Richard Skelhorn, co-founder of bgo said “I’m extremely excited to be working with Paris Hilton. She is a huge star, there is no bigger celebrity in gaming and I have always wanted to work with her on bgo. Now we have the opportunity to make it happen. I hope our next TV campaign is just the start of what will be a very successful relationship for both parties.  Our recent success after the introduction of Verne and Dan has been incredible.  The script we have been working on with Paris is very cool and I hope to increase our exposure and build upon our female player base in particular.

The spot will be filmed at The W hotel in Los Angeles in April and will again star Verne Troyer, best known as Mini-Me from Austin Powers as ‘The Boss’ of the casino.

Bgo.com was launched in 2012 and is one of the fastest growing gaming companies in the UK. It has won awards due to its innovative ‘Hollywood’ marketing strategy and is known as one of the countries more exciting gaming brands.

Paris Hilton is one of today’s most recognizable figures, known around the world as a businesswoman, entrepreneur DJ and model. She is one of the most photographed women in modern society and the topic of endless media attention and commonly recognized as one of the original pioneers of reality television. With a combined social media following of 24 million, Hilton has built a successful global empire spanning all corners of the world, with her music, fragrances, real estate properties, and clothing and accessories lines.

‘King of Instagram’ Dan Bilzerian gets back into crypto
Erik Gibbs
24 April 2018
.