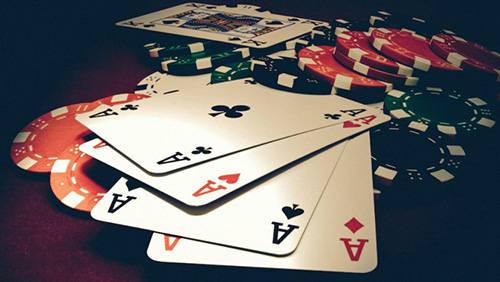 A trio of stories from celebrities with poker connections including Randall Emmett and 50 Cent going at it on social, Antonio Esfandiari outboxing Kevin Hart, and PETA going after Dan Bilzerian.

Had 50 Cent been born in the UK he would have been called 50p. It doesn’t have the same ring to it, does it – more ponytail than blended back and sides.

I can call him 50p without fear of him delivering a cap in my ass because the rapper, actor, TV producer has his crosshairs locked onto Randall Emmett, and this is where poker comes in.

Emmett fits into the ‘non-professional with lots of money who likes poker’ category. In 2018, he entered the World Series of Poker (WSOP) to the tune of a marching band playing the Rocky theme with people thinking – Phil Hellmuth has put on a bit of weight.

A few weeks ago, Poker Central positioned Emmett #3 in the PokerCentral Power Rankings for his performance on Poker After Dark. So why is 50 Cent after him?

According to TMZ, 50 Cent loaned Emmett a million bucks and helped him land a producer role on his show ‘Power’ to increase his odds of paying off the debt.

It seems Emmett has not returned the dough resulting in social media Dragonfire from the bad boy rapper.

50 Cent first targeted Emmett’s fiance, Vanderpump Rules star, Lala Kent, posting a clip of Kent sharing on the reality TV show how Emmett bought her a Range Rover the day after they had sex.

Kent reacted by ripping 50 Cent for being a bad boy rapper who watches Bravo, and then 50 Cent redirected his ire at Emmett by posting text messages of a conversation Emmett that looked like a dragon dealing with a pigeon (at one point Emmett begged 50 Cent to stop because he thought he was suffering a heart attack).

The most evocative post came from 50 Cent who suggested that Emmett’s ‘Range Rover’ sex gift showed there was no difference between Harvey Weinstein and Emmett.

50 Cent ended the whole affair by demanding that Emmett return his million bucks before Monday or face the consequences. Emmett sent 50 Cent $250,000 over the weekend, and rumours that he may be back on Poker After Dark to win the additional $750,000 are unproven.

Dan Bilzerian and the bear

Emmett isn’t the only celebrity with a fine gossamer thread to poker who has been under pressure this past week – Dan Bilzerian also received a shafting.

Bilzerian’s problems began after posting an image feeding a captive Kodiak bear during a house party to his 26.9m Instagram followers.

When your girls hungry

Bilzerian’s post sparked People for the Ethical Treatment of Animals (PETA) into action, promising to out both Bilzerian and the bear owner, Steve Martin, to the Californian authorities for failing to hold the necessary licenses to feed the said bear.

PETA also posted a blog in which they highlighted Bilzerian’s propensity to use animals as forms of entertainment at his parties by pointing out his previous use of a giraffe and monitor lizard.

Bilzerian reacted by telling PETA that he loves animals and that they can “suck his dick.”

If the bear had done that, I would have been more impressed.

Antonio Esfandiari and Kevin Hart have developed a keen friendship thanks to poker, and this weekend they climbed into the ring in a Californian gym to have a friendly punch up.

The size of the boxing bet is undisclosed, but we know that Esfandiari received odds of 35-1 based on Hart’s previous boxing experience and more athletic frame.

But boxing with a gambler is a different proposition. Remember, this is a guy who whipped his old boy out, and took a piss in a bottle at the table during the PokerStars Caribbean Adventure (PCA) Main Event in a bid to win a ‘lunging’ prop bet with Bill Perkins.

Call it a lot of money at stake.

Esfandiari bulked up for the fight, and his power and height advantage bore dividends, as the Magician emerged the winner, by decision, after three, three-minute rounds.

Hart, who recently represented PokerStars as an ambassador, and took on Usain Bolt in a series of social media challenges, says he wants a rematch once he gets his breath back.

I wanna take the time to congratulate my guy Antonio Esfandiari on a amazing sparring match today. We went 3 3min rounds and both gave it our all. In the end you were the winner by decision. You worked hard and deserve the W champ. Good shit….I want a rematch as soon as I catch my fucking breathe again 😂😂😂😂….To all boxers WE ARE NOT FIGHTERS AND WE DON’T WANT TO BE….this was a challenge between 2 friends that had a great time and put on a hell of a show!!!! We have so much respect for this sport…You guys are amazing!!!!!! #HartvsEsfandiari #Part1 …..P.S I will post some highlight videos of both of us when it’s all edited. Shit was so dope….I’m glad we did it man!!!! Love ya