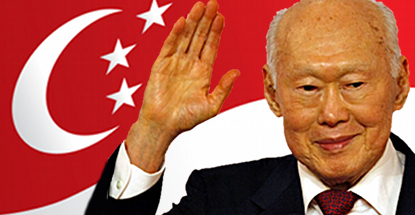 China’s lottery sales rose 24% in February, according to stats released this week by the Ministry of Finance.

While the year-on-year gains are impressive, the figures for March will make for interesting reading. As of March 1, provincial lottery administration centers were ordered to suspend online sales after Beijing determined that some unscrupulous lottery agents weren’t reporting all sales. The ‘temporary’ suspension led to a precipitous drop in the share price of online-focused lottery operator 500.com.

SINGAPORE LOTTERY PLAYERS PAY TRIBUTE TO DEAD FOUNDER
Singapore’s founding prime minister Lee Kuan Yew (pictured) died on Monday at the age of 91. A state funeral is planned for March 29 but the city-state’s lottery players have found other ways to pay tribute to their founding father.

Agence France Press reported that Singapore Pools’ four-digit lottery business has been flooded with requests for tickets using various combinations associated with Lee, including the exact time of his death (03:18), his date of birth (16/09/23) and death (03/23/2015), even the license plate number (8898) of the hearse that carried his body to the place where it currently lies in state.

The most popular combinations have already sold out at Singapore Pools, the city-state’s only authorized lottery vendor, leaving punters scrambling for alternative numbers. More adventurous punters have sought out unsanctioned operators, who offer higher rates of return than state-sanctioned options.