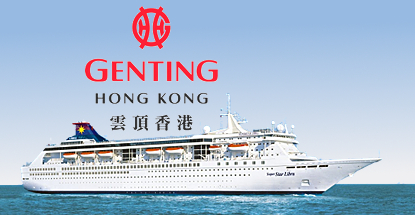 Last month, GHK had warned the Hong Kong Stock Exchange that its 2014 profits were likely to tumble by 37%. Instead, profits were down a mere 30.3% to $384m. The numbers got two significant one-off boosts totaling $276m from share disposals related to associated firm Norwegian Cruise Line Holdings. Earnings rose 4.3% to $49m.

Overall revenue up was 3% to $571m, while gaming revenue was up 10.5% to $349m. GHK said gaming’s gains had come from an improved hold rate despite a “reduction in gaming volume.” Passenger ticket revenue fell 15.6% to $135m thanks in part to the MV Superstar Virgo being in dry dock. Onboard non-gaming revenue dipped 5% to $63.6m.

GHK’s 45% share of the profits from Travellers International Hotel Group – its joint venture in the Philippines with Alliance Global Group – came to $52.4m, two-thirds more than the sum earned in 2013. GHK said the improvement was due to cost management initiatives. Travellers run the Resorts World Manila casino and are developing the Bayside Resorts World integrated resort in Entertainment City.

Since the year ended, GHK has seen the launch of its new land-based casino joint venture with Landing International Development on South Korea’s Jeju island. GHK also expanded its oceanic presence via the $550m acquisition of Japanese operator Crystal Cruises. GHK has two new cruise liners under construction in German shipyards that are scheduled to launch in 2016 and 2017.

RESORTS WORLD LAS VEGAS GETS GROUNDBREAKING DATE
On the other side of the world, the Genting Group has set a date to start turning sod on its $4b Resorts World Las Vegas project. Local Fox affiliate KVVU reported that the Clark County Board of Commissioners had scheduled a groundbreaking ceremony for May 5. When complete in two or three years, the first phase of the property will boast 3,500 hotel rooms and 175k-square-foot casino floor.