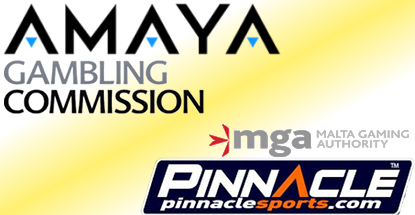 On Friday, Amaya announced that its PokerStars and Full Tilt brands had received official UKGC approval to offer online poker and other gaming options to UK residents. Amaya’s B2B online casino business was also approved, something that will be greatly appreciated by whoever ends up buying those B2B assets.

The UK introduced a new gambling regime last year that eliminated the so-called ‘white list’ of licensing jurisdictions and required all UK-facing operators to hold a UKGC license. Amaya’s entities – which had been been operating in the UK courtesy of licenses issued by the Isle of Man – had already received temporary continuation licenses from the UKGC but Amaya spokesman Eric Hollreiser said the company was “very pleased” to get the official nod in what is “a large and growing market for us.”

PINNACLE RECEIVES MALTA LICENSE
The new owners of online sports betting operator Pinnacle Sports aren’t wasting any time in advancing their strategy of expanding into regulated markets. On Thursday, the Curacao-licensed Pinnacle announced it had been issued a Class 2 Provisional Gaming License by the Malta Gaming Authority (MGA).

Pinnacle CEO Paris Smith said the company was chuffed to have received a license from “one of the most trusted authorities in gaming.” The MGA’s endorsement “secures an important foundation for our aggressive growth strategy for 2015 and beyond.” Smith’s statement also said Pinnacle was keen on developing “relevant B2B relationships.”

MGA executive chairman Joseph Cuschieri said the regulator was equally chuffed at having “one of the biggest brands in the gaming industry included in its licensing portfolio.”