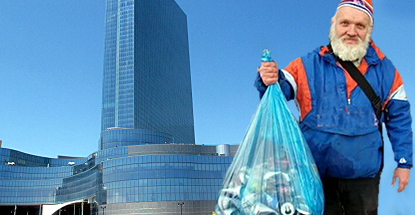 Trump Entertainment, which operates the Trump Taj Mahal in Atlantic City, filed for Chapter 11 bankruptcy protection in September, the fourth such filing in the company’s not-so-illustrious history. Icahn, who holds $290m of the company’s debt, will receive 100% of the reorganized company’s equity according to the plan approved on Thursday by Delaware bankruptcy judge Kevin Gross.

To secure the support of a creditors’ committee, Icahn agreed to provide unsecured creditors with $3.5m in cash, $2.5m more than they would have received had the property gone into liquidation. Icahn also agreed to provide up to $82.5m to keep the Taj Mahal going while it gets back on its feet. In exchange, creditors agreed to release Icahn and Trump Entertainment from liability from future litigation.

The plan can yet be undone by the Taj Mahal’s unionized workers, who are appealing an October court ruling that voided their health and pension benefit programs. Trump Entertainment financial adviser William Hardie said the company had enough cash to maintain operations while the appeal is pending but Icahn has the option of walking away from the deal should the appeal succeed.

REVEL SALE SCRUBBED FOR THE THIRD TIME
“History repeats itself, first as tragedy, then as farce.” So said Karl Marx and so says everyone watching the sorry saga that is Atlantic City’s Revel casino. On Friday, US Bankruptcy Judge Gloria Burns said she couldn’t approve a deal that would have seen Revel sold to Florida developer Glenn Straub for $82.5m.

On Friday, Burns said she couldn’t approve Straub’s latest offer due to ongoing legal challenges of the previous deal by those disgruntled tenants. Meanwhile, other bargain-hunters have begun sniffing around, including Los Angeles developer Izek Shomof, who has offered $80m to take over the cursed property. Be sure to tune in next year, when Revel is sold to a homeless man in exchange for a shopping cart full of empty soda cans.