Home / Sports / 2015 Champions League: Who will advance to the quarters? 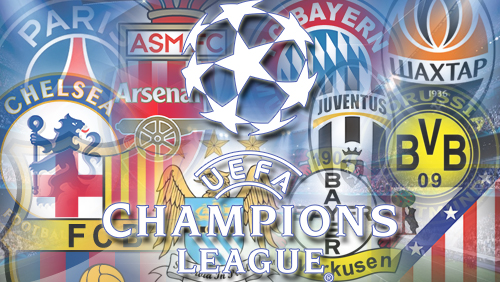 Boy, oh boy. If there’s anything that Real Madrid-Schalke barnburner just taught us, it’s that you can expect a whole lot of nuttiness in the Champions League this season. I’ll be the first to admit that I had written off Schalke even before that return leg to Madrid. A 2-0 deficit against Real Madrid and then trying to make that up at the Bernabeu? Yeah, good luck.

Turns out, I was wrong. Way wrong. Schalke not only scored a 4-3 win, but they came so close to pulling off what would’ve been a stunning upset against the defending champions: Incredible! Real Madrid should be thankful they escaped with a 5-4 aggregate win, but not before they made everyone in Madrid lose their collective minds.

With that result, Madrid moves on to the quarterfinals where they’ll join FC Porto after the latter dismissed FC Basel rather convincingly in the other game earlier today.

Now it’s time to check out the remaining six games that will be played in the next six days.

This is arguably the most intriguing matchup of the Final 16 and the first leg encounter between the two sides pretty much showed how much Middle Eastern money can have an effect on the biggest stage of club football. This game moves to Stamford Bridge where Chelsea have pretty been impregnable in the current English Premier League season. But PSG poises a lot of problems for the Blues and while Chelsea is still the favorite to advance at 4/9 odds, don’t think for one second that PSG’s 2/1 odds to advance are a complete shot in the dark. If there ever was a game to feel good about the underdog advancing, it’s this one.

Shakhtar Donetsk is nowhere near in the same class as Bayern Munich so you can pretty much pencil in the German champions to advance here. That doesn’t take away from the admirable job Shakhtar did when they played in Lviv in the first leg. Holding Bayern Munich to a scoreless draw is no easy feat. So even if Shakhtar will likely get blown out here – Bayern has 1/10 odds to advance; Shakhtar has 6/1 odds – the champs from Ukraine can take solace in the fact that they did something very few teams in the world are capable of doing.

Talk about bad timing. That’s probably the prevailing sentiment among Manchester City supporters these days. Domestically, the team’s chances of winning the Premier League grow longer by the week, but it’s hopes to finally breakthrough in the Champions League is teetering yet again, thanks in large part to playing FC Barcelona at a time when the Spanish club appears to finding its form after some early-season struggles. If this game was played in late 2014, I would’ve liked City’s chances. But since the calendar flipped to 2015, Lionel Messi has been on a rampage and there doesn’t appear to be anything that could stop him these days. Barca also has the favorable advantage of holding a 2-1 aggregate lead with two away goals already in the bank. If City wants to shock the football world, it’s going to have to go to Camp Nou and win by at least two goals. Such a proposition is easier said than done but doing it against a Barcelona team that’s clicking on all cylinders looks even more implausible.

You can throw a dart in the dark and bet on City to advance, but you’d be doing so against Messi and the 7/1 odds on City that actually seems pretty low at this point.

It’s easy to forget that Atletico Madrid was actually one Sergio Ramos header away from winning the Champions League last season. But the Champions League gods, if there’s such a thing, dealt Atletico a cruel hand last season and now, the finalists face an uphill task trying to overturn a 1-0 deficit against Bayer Leverkusen. Bookmakers, though, believe that Atletico has a good chance to do that, giving them even odds to get past Bayer Leverkusen. Conversely, Bayer, despite that aforementioned 1-0 aggregate lead, are sitting at 4/5 odds to advance. You would think that the number would be a little lower, but it’s a clear sign that bookmakers are putting a lot of faith in the Spanish team and not enough on their German counterparts.

Remember when Monaco conceded just one goal during the group’s stage of the Champions League? The French team gave up the same number of goals against Arsenal in the first leg of their Round of 16 match, but that doesn’t even matter after Monaco hung three goals against the English squad…in the Emirates no less. Arsenal – 6/1 odds to advance – will have a huge mountain to climb when it meets Monaco – 1/6 to advance – in Stade Louis II, and as much as I think the Gunners will make it interesting, those three away goals Monaco scored at the Emirates will be a tough thing to overcome.

On paper, this looks like a mismatch, at least when you take their domestic records into account. But don’t sleep on Dortmund pulling off a mini upset of sorts against Juventus. That first leg was probably the best case scenario for Dortmund had it lost the game, if that makes sense. It got an away goal in the process and if it can hold Juventus scoreless and just get one of their own, that would be enough to see them through. That’s probably a big reason why sportsbooks aren’t keen on giving Dortmund higher odds than 8/5 to advance. And if you’re betting on Juventus to advance, isn’t the 1/2 odds a little too high for a team with a 2-1 aggregate lead?