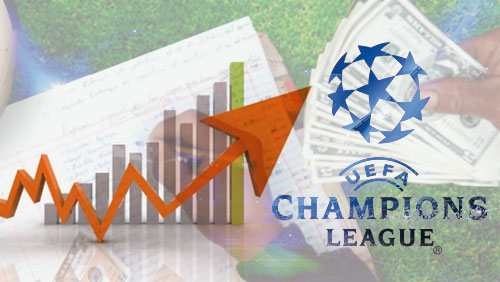 The Champions League group stage has concluded so now we’re in the real meat-grinder. Knockout games loom, which means that if you don’t show up, you can get booted out without warning. We’ve seen happen year in and year out and you can expect more of the same to happen this year. With 16 teams left in the running for the biggest football tournament in the world not named the World Cup, I ranked all the teams that are still alive in the Champions League. Notice that I didn’t do it based on their odds to win the title, but on how I see each team based on their performance in the group stage and how their doing in their domestic leagues.

FC Basel (150/1) – Barely survived the group stage and has the lowest point-total of any team to make it this far. Don’t expect them to do to much at this point, especially if they’re drawn up against one of the favorites.

AS Monaco (125/1) – Would’ve been a lot more interesting if James Rodriguez and Radamel Falcao still played for them. As it is, Monaco somehow won its group despite scoring only four goals. Their defense was stellar throughout the stage, but how far can you expect them to go now that they’re about to face some of the continent’s best teams. You need to score to move on and Monaco doesn’t have the horses to do that.

Shaktar Donetsk (150/1) – Don’t be fooled by their 15:4 goals:goals against ratio. 12 of those goals came against their two games against BATE. Shaktar’s another one of those teams that was good enough to squeak out of the group stage but is nowhere near in the class of some of Europe’s finest.

Schalke 04 (150/1) – Porous defense will be their undoing. They can keep it close for long stretches, but once they gas out, that defense becomes a sieve. I’m also worried about some of their talent getting poached in the transfer season. If they lose out and not bring some players in, they could be in trouble from the get-go.

Porto (50/1) – They can make some noise, but only if they get lucky with the draws. Porto’s a team that feasts on inferior squads but seems to have trouble when line up against the elite.

Bayer Leverkusen (80/1) – Lost out on the top spot of the group in the last game of the stage so now they’re relegated to a tougher draw.  They’ve got some players who can make some noise but the only question is, will they still be around when the knockout round begins in February?

Arsenal (25/1) – A little overrated in my opinion. Looked strong in the group stage, but they belonged in the worst group of the tournament. Their lack of consistency in the English Premier League is a concern if you want to ride your horses on this team in the Champions League.

Juventus (28/1) – If you’re looking at a real dark horse, this is your team. They had some early-season struggles, at least as far as their standards are concerned, but they seem to be peaking at the right time. Again, a lot depends on what happens in the transfer season, but if Juventus can keep all its stars and add more depth to their defense, this line is the biggest value play out there.

Dortmund (22/1) – The ultimate risk-reward team. Unlike Arsenal, Dortmund’s a much better team than their Bundesliga record suggests. Group these guys together with Juventus as one of the real dark horses. But Dortmund also has a huge asterisk. If star player Marco Reus bolts in the January transfer season, expect their odds to drop somewhere in the 70/1 to 80/1 range. Reus is arguably the biggest wild card of the Champions League. If he stays, Dortmund can compete. If he goes, whichever team gets him will get better odds.

Atletico Madrid (20/1) – They could make a deep run but can they replicate the same form they displayed last season when they were literally minutes away from winning the Champions League? If breaks go their way, they can. But I’m not confident about it.

Manchester City (12/1) – Displayed a lot of moxie when they won against Roma to secure their spot in the knockout stage. Doing so without some of their best players also showed that Man City may be on the verge of being a serious threat against the bigger teams in the continent.

Chelsea (6/1) – Depth against EPL teams isn’t a question. But against Barcelona, Bayern Munich, and Real Madrid? Not so sure about that. Mourinho has shown that he can push the right buttons on this team and they have a clear identity as a high-scoring bunch, but what happens when that offense gets throttled? Can they hunker down and play an ugly game when the situation calls for it?

Barcelona (5/1) – Outside of Juventus and Dortmund, this is the bet bet on the board. They’re getting slept on because of how strong Bayern Munich and Real Madrid are. But if they can get their groove at the right time, Barcelona can absolutely win the tournament.

Bayern Munich and Real Madrid (3/1) – You can interchange these two teams depending on your preference. Right now, they’re the co-favorites and rightfully so. Both are flexing their muscles in their respective domestic leagues and you can expect them to breeze through until the semis before they meet any kind of resistance.

Who Will Win the Europa League?
Paul Seaton
2 December 2020