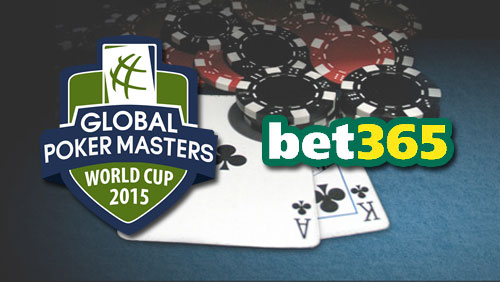 The Global Poker Index has released the full schedule of the upcoming 2015 Global Poker Masters, and Bet365 are offering odds on which nation will win poker’s World Cup competition.

In 11-days time the very best poker players in the world will gather in Malta to eat rabbit, get wet, and compete in poker’s first World Cup competition. I am, of course, talking about the 2015 Global Poker Masters, and the man behind it all has just released the final schedule.

The event will take place over two days: 21 – 22 March, with the action forming part of the European Poker Tour (EPT) in Malta. Interesting parties, who are not in Malta, needn’t fret as all the action will be streamed live on Twitch, in five different languages.

The Playoffs commence on 21 March. Action will broadcast on Twitch between 11.30am and 01.30am. The teams will compete in 25 8-person Sit n Go’s divided into five different rounds. Points are awarded for finishing positions. The team placed last is eliminated, the team placed first moves into Phase 3 and the other six teams move into Phase 2.

Phase 2 is a series of heads-up matches based on a ‘best of 3’ series. Once again points are awarded for the winning teams, and at the end of the matches the team positioned last will be eliminated. The remaining six teams will move forward into the six-max action.

Phase 3 will see the remaining six nations select one player each to participate in a Six-Max Sit n Go competition. Stack sizes depend on how many chips each country has accrued during the previous two phases, and play will continue until there are only two players remaining.

Phase 4 is the time to crown the winner of poker’s World Cup. The two top nations will play out a series of five heads-up matches simultaneously, and the winning country will be the one that wins 3 out of the 5 matches being played out.

Seven out of the eight teams have declared their hand, with only the U.S yet to complete their five-man roster.

GPI founder, Alex Dreyfus, was pretty stoked about the opportunity to watch the action live via Twitch, saying it would be a great opportunity for sports books to get into the action.

Bet365 has started to offer odds for the ‘Outright Win’ and Team Canada are the current front-runners at 2.20. Team Ukraine are a great price at 17.00, but at the time Alex Dreyfus took his screenshot, on Twitter, they were an incredible 41.00.

Accurate as per Monday 9 March 4pm