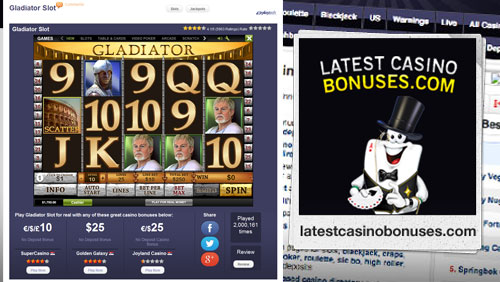 LatestCasinoBonuses.com has reached its third consecutive milestone within the last three months as the site’s free play version of Playtech’s Gladiator slot  has been played 2 million times!

Players are drawn to the Free Games section of LCB, especially Gladiator having launched it for a whopping two million play sessions. The Slot was initially released in 2008 and has become wildly popular due to the theme based on the DreamWorks blockbuster hit film, Gladiator. LCB members come to the site to try the latest online casino games including American members that are unable to access Playtech games for real money.

In December 2014, LCB had reached its 3,000th free game followed by another milestone in January 2015 of 70,000 registered active forum community members since the site’s launch in 2006. February rolled around and brought about a new record LCB.

LCB offers a wide range of free games from many providers including some of the top names in the industry such as NetEnt, NextGen, Mirogaming, WMS and of course Playtech, to name a few. Aside from Gladiator’s theme there are a few other factors that make it such a favorite. The betting range allows players to wager as low as$0.02 per spin and as high as $6,250. Not all players have the opportunity to play the maximum bet unless they are quite the high roller so free play is a way to experience the excitement. Slot players are also attracted the maximum payout of $1,250,000, which would be an amazing win on a 50-line Slot Game.

There are two bonus games including the Gladiator and Colosseum Bonuses. Three Gladiator masks trigger the Gladiator Bonus. The mask symbol is wild on reels two, three and four substituting all symbols except for the Colosseum Scatter. The Colosseum Bonus is triggered with three Scatter symbols appear on the reel. Players are presented with a series of columns featuring stones, which reveal winnings including credits, multipliers and even free spins.

Although it has been 7 years since the release of the Gladiator Slot, online gamblers continue to be drawn to the power and strength behind the mask. Playtech brought the movie to life on the reels and resulted in another record for a gladiator in the online casino affiliate industry, LCB.