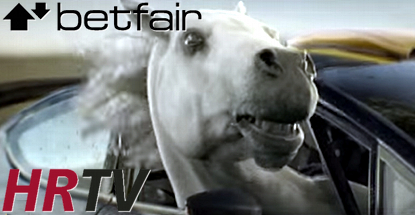 The US division of UK-listed exchange betting operator Betfair has acquired the HRTV horseracing television network from the Stronach Group. Betfair TVG has agreed to pay $25m up front with future payments of up to $47.8m depending on the effect of the deal on TVG’s race betting handle.

The deal expands TVG’s racing coverage by adding broadcast rights to all races at tracks owned and operated by the Stronach Group, including Santa Anita, Gulfstream Park, Pimlico, Golden Gate Fields and Laurel Park, for a seven-year term.

Betfair believes the deal “strengthens TVG’s ability to drive incremental wagering on its advanced deposit wagering platform and is expected to lead to additional advertising and distribution opportunities.”

The deal will eliminate the $4.3m annual sum TVG had been paying to the Stronach Group for broadcast rights. Betfair said the transaction would be earnings-neutral in the first year but accretive thereafter. HRTV lost $3m in 2013 on revenue of $9.5m.

Back in its home market, Betfair has unleashed a new racing-themed TV ad campaign to prepare the ground for next month’s Cheltenham Festival. The ‘Tap Tap Boom’ spot was created by WCRS, directed by Papaya’s Brent Bonacorso and expands on Betfair’s ‘This is Play’ marketing pitch.

The spot (viewable below) features horses driving rally cars, to the apparent chagrin of the jockeys sitting in the passenger seats. WCRS executive creative director Leon Jaume said the spot fit well with “the Betfair world of ping pong playing cephalopods.” Betair brand director Mark Ody said “people believe betting is exciting and that betting with Betfair is even more exciting. Our new suite of ads brings this to life in a highly distinctive, enjoyable and engaging way.”