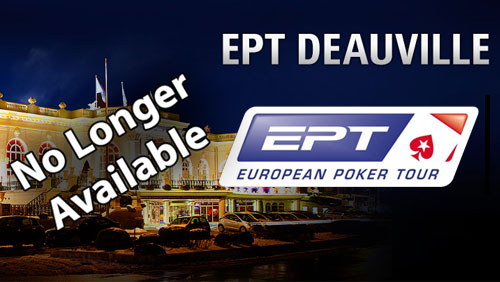 The French poker community has been dealt another blow with news that the European Poker Tour Deauville Festival will not be returning in Season 12.

France and poker go together like a lion and an antelope.

According to PokerNews scribe Giovanni Angioni, poker players enjoying life on the European Poker Tour (EPT) will not get the opportunity to travel to Deauville in Season 12.

It’s a body blow of Carl Froch proportions for the French. Finding a top quality live event in France is becoming more difficult than finding a Pamela Anderson marriage that works.

The Partouche Poker Tour (PPT) was once one of the most eagerly anticipated events on the annual calendar. In 2012, Patrick Partouche, CEO of Groupe Partouche, rang the death knell. Whilst it’s true that there were a lot of reasons why people were glad to see the back of the event, it did leave a hole in the French live poker schedule.

That hole widened in 2013 after the World Series of Poker (WSOP) announced plans to break up its annual jaunt to Europe, and host an intermediate event in Melbourne. At the time of the announcement the WSOPE was being held in Paris. Shortly after it was revealed that the 2015 WSOPE would be held in Berlin.

Paris has also received more daggers to the heart than a knife throwers assistant twirling on a wooden board in front of a heavily armed Stevie Wonder. The World Poker Tour (WPT) ceased their annual Grand Prix de Paris, and the French authorities shut down the home of that event: The Aviation Club de France.

The news casts a shadow over the future of the French Poker Series (FPS) as it has been tied to the hip of the EPT Deauville Festival since the decision was made to combine the prestigious tour stops with the localized tours. But McAdam does have some good news for FPS players.

“The partnership with Barriere will continue with exciting FPS stops to be announced soon.” McAdam told PokerNews.

Only two stops have so far been announced for EPT Season 12. The season kicks-off in the Catalan capital, Barcelona: Aug 19-30, where the tour will once again marry up with the Estrellas Poker Tour. Prague is the only other event standing in hardened cement. They will partner with the Eureka Poker Tour Dec 6-16.

With the PokerStars Caribbean Adventure (PCA) almost certainly a lock-in, no apparent reason to shift the Grand Final away from Monte Carlo, and the testing ground of Malta just a few weeks away. It leaves room for three more possible locations for the EPT. They are keeping their powder dry for the moment.

Deauville was a royal pain in the ass to get to. The first time I visited from the UK I took six different trains to get there. Once there as, pretty as it is, there isn’t very much to do. Food choices are minimalistic. Activities are arid. All there is to do is play poker.

And that’s all the French want to do.

“I don’t think the end of EPT Deauville is down to the appetite of French poker players.” Said Global Poker Index CEO Alex Dreyfus. “The French poker community and pool of players is huge, as has been proven with the success of the FPS, and other mid-level events such as the DeepStackOpen and WPT National Series.

“I understood that EPT wanted to deliver the full “EPT Experience” in terms of cash games, registration and gaming experience. The French regulation is not built to allow what the EPT wants to offer.”

Not everyone in France is sad to see the back of EPT Deauville.

“I’m not particularly sad to see EPT Deauville go.” Said the former Winamax pro Manuel Bevand. “It wasn’t the most exciting location for poker players, particularly in January. Also, on a personal level I was robbed in one of the official hotels and never cashed in the Main Event! I hope the EPT still holds events in France though. There are plenty of fine locations and French poker needs at tour like this at the moment.”

“We are exciting to offer players a different European city in Season 12.” Said McAdam.

For the moment, where that will be remains a secret.