Home / Sports / Weekly Poll: Who will be next pro league boss to likely strike a favorable sports betting position? 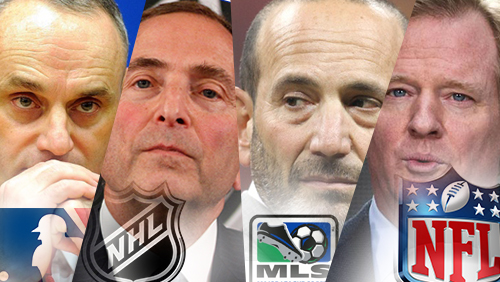 NBA Commissioner Adam Silver opened the discussion of a professional sports league warming up to the idea of supporting legalized sports betting, which is why we decided to ask our readers, “Who will be next pro league boss to likely strike a favorable sports betting position?”

Naturally, Silver has become somewhat of a hero in these parts for his stance. his willingness to have a discussion on the subject got us thinking. Outside of Silver, which commissioner among the the four other professional sports leagues will most likely follow Silver’s lead and be receptive to the previously frowned upon idea of embracing a legalized sports betting environment.

We put four names on the list – Major League Baseball’s Rob Manfred, the NHL’s Gary Bettman, the NFL’s Roger Goodell, and Major League Soccer’s Rob Garber – and after a week of voting, well, the results are in.

What we found out wasn’t really that surprising because Manfred, the newly appointed commissioner of MLB, came away with the most votes, getting 50% of total votes. Why isn’t this surprising? Well, Manfred actually opened up about the idea already, telling ESPN.com that a legalized sports betting structure is something he’s willing to discuss with team owners in the league. That itself kind of already answered the poll, right?

Outside of Manfred, Garber got 30% of the votes. In the interest of full disclosure, I actually thought Garber would win this poll before I heard about Manfred’s comments. It just makes sense for Major League Soccer to support such a move because it plays a sport that’s actually the most bet-on sport in the entire world. That and the surge in popularity the MLS could get would probably rival the same effect David Beckham had when he joined the Los Angeles Galaxy a few years ago. We know that the MLS is the least popular of the five professional sports leagues in the US, so what better way to get more people watching their games than having them bet on these matches. It’s worked pretty well over in Europe so there’s no reason why it shouldn’t work to inject some juice into the veins of Major League Soccer.

With Manfred and Garber getting a lion’s share of the votes, this leaves us with NHL Commissioner Gary Bettman with 20% and NFL Commissioner Roger Goodell with 0%. To his credit, Bettman received his fair share of votes, even though he’s probably the least likely to sign off on a legalized sports betting environment. For what it’s worth, ice hockey doesn’t get nearly the same amount of betting handle than the NBA, much more the NFL. So for Bettman to support legalized sports betting, a lot of things have to happen for him to get to that point. Having a team in Las Vegas could help in that regard, although it’s unlikely Bettman puts an expansion team in that city when there are other cities that are far more equipped to support an expansion team – shout out to Seattle! – than Las Vegas.

Then we have Roger Goodell. Actually, it was a little funny that nobody voted for Goodell. His league’s stance against legalized sports gambling is well-documented and we all know how stubborn Goodell can be, even if it comes in the face of basic logic. Having him throw his support towards a legalized sports betting environment is tantamount to seeing Bart Simpson grow some hair.

Don’t count on it.

Next week, we ask, “Which gambling destination will benefit the most from Macau‘s slowdown?” as the world’s top gambling hub’s, Macau, gross gaming revenue continues to fall and is expected to drop 46% this February. Join our weekly poll and check back next week for the result.