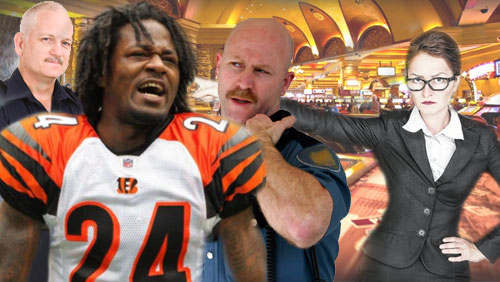 A year after Ray Rice violently cold-cocked his then-fiance, now-wife Janay Palmer-Rice in an elevator inside the since-shuttered Revel Hotel & Casino, another NFL player has figured into another incident inside a casino.

This time around, the unwitting participant is Cincinnati Bengals’ defensive back Adam “Pacman” Jones and not surprisingly, TMZ was the first to report on the incident, much like it did with the Ray Rice scandal. Seems like a case of deja vu for Roger Goodell and the NFL.

According to TMZ, Jones was kicked out of the Hollywood Casino in Lawrenceburg, Indiana because of an incident that began at the casino cage where Jones reportedly got into an argument with an employee involving casino chips. Jones was then escorted out of the casino where video footage showed Jones having a heated discussion with police officers, claiming that he didn’t do anything wrong.

A lot of the parties involved, including the casino, the officers on the scene, and prosecutors have yet to release any comments surrounding the incident, but Jones himself has already come out to air his side, telling WLWT News 5 in Cincinnati that the casino asked him to leave because “I had dip.”

“There wasn’t an arrest because there was no crime committed, and I left on my own,” Jones added.

The incident is currently under investigation by the Lawrenceburg police.

This episode is the latest in a string of headaches the NFL is already dealing with in the offseason. The fact that it hasn’t even been two weeks since Super Bowl XLIX was played and you get a clear idea of how much of a mess the league is in right now. This incident could amount to anything, or there could be something there that sends another controversy into the NFL’s lap.

Making matters even more complicated is the principal involved. Jones, after all, has had a string of off-field incidents that have turned him into a lightning rod of sorts. Just last month, a Nevada court upheld a $12.4 million judgment against Jones for his role in a 2007 shooting at a Las Vegas nightclub. That’s on top of multiple disorderly conduct and resisting arrest citations he’s received in recent years, including one from September 2013 when Ohio State Highway Patrol troopers cited Jones for disorderly conduct during a traffic stop.

All this isn’t to say that Pacman did anything wrong inside the casino. All the facts have yet to be revealed, but it still doesn’t paint a pretty picture when you see Adam Jones appearing in reports like this, contrived or otherwise.