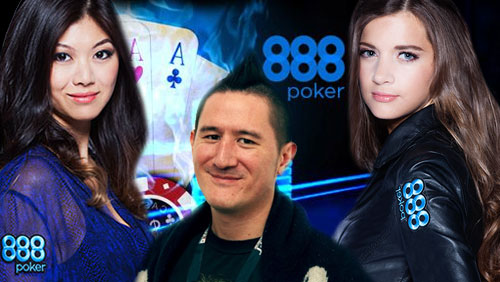 A trio of stories from Camp 888 with the sad news that Xuan Liu will say bon voyage, the good news that I get to play in an 888Poker sponsored event in Dublin, and Sofia Lovgren describes her dream home game.

A triumvirate of 888Poker related stories begins with the news that the Canadian Xuan Liu has parted ways with her sponsor after only a year as part of the gang.

Very grateful to have been given the opportunity for a year but will no longer be an @888poker ambassador.

Liu joined 888Poker in April 2014, the same time that the Swedish pro Sofia Lovgren also make the switch from Team PKR. Sam Holden left space on the team after deciding to focus on a career in philosophy. In January, Liu finished runner-up to Sean O’Reilly in the A$1,040 No-Limit Hold’em Six-Max at the Aussie Millions for a score of $58,734. It was her biggest score since joining the team. Liu is the third big name departure after Shane Warne and JC Tran also departed ways in the past six months. There has been a strong outpouring of support on Twitter with Jackie Glazier, Kara Scott and Gillian Epp all paying tribute to her ambassadorial role.

@xxl23 @888poker Sad news Xuan. Always a class act and an inspiration for me! Gl in your next adventure and see you in Vegas! — Sofia Lövgren (@Sofia_Lovgren) February 11, 2015

Lovgren is the type of star that many people would include in their dream home game. But who would Lovgren choose if she was to rub a genie and get him excited enough to spurt out the table of her dreams?

The Swedish starlet tells all on her blog, and it’s an interesting mix derived from feelings of love, connection, humor and inspiration.

Lovgren shows her love of family by giving seats to her brother Fredrik, and her right hand man Luca Moschitta. Of Fredrik she says he ‘is a surprisingly good player when he’s not tilting, and very funny.’ Her boyfriend is invited to the party because…well he’s her boyfriend.

Kid Poker gets a seat because he is ‘incredibly entertaining’ and she knows how to use her image to ‘bluff him in some big pots’. Gus Hansen is invited because he is a ‘living legend’. Guy Laliberte’s big heart gets him a spot at the table. And the final seat goes to Barack Obama whom Lovgren says she would love to ask him if he ‘likes Vladimir Putin’?

What did he win again?

On Tuesday I am heading to Dublin to take place in 888Poker Local Live. It’s a €30,000 Guaranteed event, with a €220 buy-in for 25,000 chips. The event is being held at ClubPoker in Rathmines Road, and if you are in the vicinity pop in and I will make sure I buy you a pint of tap water.

Perhaps, if I play well enough 888Poker may snap me up.

There’s a vacancy for a super hot, extremely talented Asian player after all.