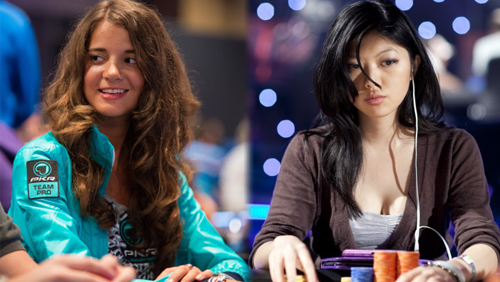 Xuan Liu and Sofia Lovgren are the latest female poker players to be signed up by a leading online poker brand, as they become the new ambassadors of 888poker.

The female of the species continues to be the way forward for the marketing departments of the world’s online poker organizations, as Canada’s Xuan Liu and Sweden’s Sofia Lovgren, become the latest female poker players to be snapped up by an online poker site.

The site in question is 888poker and the pair arrive just days after the former November Niner, Sam Holden, decided to leave 888poker to instead concentrate on his philosophical studies, when he announced his semi-retirement from the game.

Lovgren left her former sponsor PKR, after four years in her role, prompting many industry insiders to assume she was signing on the dotted line with PokerStars. Liu had no affiliation with any online site before her hook up with 888poker, but she was actively involved with PokerStars on a non-contractual level.

The appointments now mean that the 888poker team contains four female poker players with Liu and Lovgren joining Jackie Glazier and Jessica Dawley; and the appointments come hot on the heels of Ultimate Poker’s decision to sign Danielle Moon-Andersen, in a clear indication that online poker sites believe that female poker players have an integral part to play when it comes to attracting new players into the game.