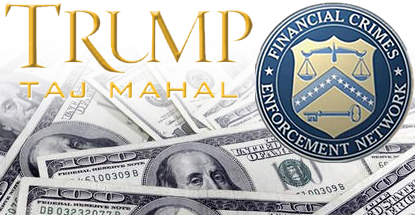 Atlantic City’s beleaguered Trump Taj Mahal casino has been hit with a record $10m penalty for serious lapses in its anti-money laundering (AML) protocols. The fine was issued after the Taj failed to file about half of its required reports on currency transactions and suspicious activity, even after Internal Revenue Service examiners repeatedly raised concerns about the lapses.

The record fine was issued in January but only came to light as part of the Taj’s ongoing bankruptcy proceedings. A filing with the Delaware bankruptcy court listed the US Treasury Department’s Financial Crimes Enforcement Network (FinCEN) as an unsecured creditor, meaning the feds are likely to collect only pennies on the dollar – perhaps less than $50k – when the Taj finally sorts out its tortured finances.

FinCEN told the Taj it was under investigation in April 2014 over transactions that occurred between 2010 and 2012. The IRS had told the Taj that some of their customers’ names didn’t match their listed social security numbers, yet the Taj neglected to follow up on this warning. The Taj also failed to monitor and report when gamblers pumped more than $10k per day into slot machines.

The Bank Secrecy Act requires casinos to keep track of all transactions over $5k. Lately, FinCEN director Jennifer Shasky Calvery has been reminding casinos of their obligations as “complex financial institutions” and wondering why, when casinos make liberal use of ‘big data’ to target customers with tailored promotions, they can’t seem to file paperwork that doesn’t earn them any profits.

The Taj is the latest casino to get out its checkbook (albeit the rubber kind) to make nice with federal authorities. In 2013, Las Vegas Sands paid $47.4m to avoid criminal prosecution over its dealings with a Mexican casino whale/alleged meth dealer. More recently, Caesars Entertainment announced it was under investigation for money laundering lapses at its Caesars Palace property and Wynn Resorts is believed to be under investigation for undisclosed shenanigans.