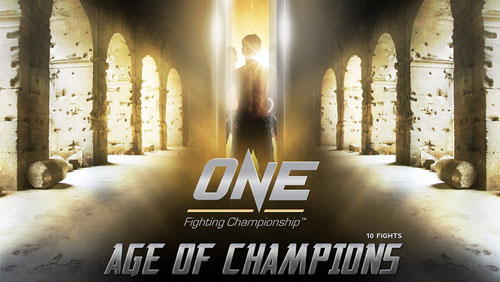 5 February 2015– Singapore: ONE Championship™, Asia’s largest mixed martial arts organization with a 90% market share, presented by Tune Talk, has added six additional bouts to ONE FC: AGE OF CHAMPIONS. The Malaysian Warrior Superfights will feature Malaysian lightweight Peter Davis as he takes on Indian MMA veteran Rajinder Singh Meena and Malaysian fan favorite Ann Osman as she takes on teen sensation Angela Lee. These bouts will air live on Malaysian free-to-air broadcast station, TV9. Two flyweight bouts will also be on the card. After three bouts as a bantamweight in ONE FC, Thanh Vu will move down to flyweight to take on Malaysia’s Gianni Subba. Saiful Merican will also return to action to take on Thailand’s Anatpong Bunrad. Malaysia’s Ev Ting will also return to take on Cary Bullos and Chan Rothana from Cambodia will face Ramon Gonzalez.

The Malaysian Warrior Superfights will be broadcast live on Malaysia’s free-to-air television station, TV9 which is the second most watched television channel in Malaysia after TV3. Besides, TV9 recently signed a deal to continue its partnership with ONE FC as its official media partner in Malaysia. TV9 is one of the four Free-To-Air (FTA) television stations under Malaysia’s leading media conglomerate, Media Prima Berhad. This will mark the first time that mixed martial arts will be broadcast live across the country.

Tickets for ONE FC: AGE OF CHAMPIONS, presented by Tune Talk, are on sale now at www.AirAsiaRedTix.com. Ticket categories begin with the full Red Carpet and cageside experience for VVIPs at RM388 followed by VIP RM278, Gold RM168, Silver RM108 and Bronze RM58. Early bird promotions for Gold, Silver and Bronze categories are available until 31 January. Prices include ticketing fee.

CEO OF ONE Championship, Victor Cui, stated, “ONE FC: AGE OF CHAMPIONS is set to kick off 2015 with a bang! The ONE FC Flyweight World Championship will be on the line when Adriano Moraes defends his title for the first time against Riku Shibuya. It will also be the first time that Malaysian fans can watch ONE FC live on primetime with two Malaysian Warrior Superfights. Peter Davis is one of the most recognizable sportsmen in the country and he will take on Rajinder Singh Meena on one of these fights while Malaysian fan favorite Ann Osman will take on Hawaiian teenage sensation Angela Lee.”

Peter Davis is one of the most prominent faces in sports in Malaysia today. An established actor and model in the country, Davis is currently riding a three-fight winning streak in ONE Championship. An exponent of the Chinese martial art of Wuji Chuan, Davis is a certified finisher with none of his bouts in the organization having gone the distance.

Rajinder Singh Meena is an Indian mixed martial arts veteran. The lightweight is one of the leading stars in the MMA scene in India, having competed in the main event of several shows held in the country. Singh Meena is also a proven finisher, and all of his victories have come via either submission or knockout.

Ann Osman is a pioneer of female mixed martial arts in Asia. She burst onto the scene with a series of impressive performances, including her victory over boxing world champion Ana Julaton at ONE FC: REIGN OF CHAMPIONS. Osman has effective takedowns and powerful ground-and-pound, making her a formidable foe for anybody in the division.

Angela Lee is currently living in Hawaii and of Singapore and Korean descent. The eldest child of two Taekwondo instructor parents, Angela grew up practicing various forms of martial arts, and quickly built an impressive resume. Her list of accolades includes being state wrestling champion and World Athlima Pangration Federation champion. She is also a Brazilian Jiu-Jitsu purple belt, and an amateur strawweight champion in mixed martial arts. Lee now makes her much-awaited professional debut as she takes on one of the most recognizable faces in women mixed martial arts.

Thanh “Aladdin” Vu is an Australian-Vietnamese mixed martial artist who is rated as one of the best prospects in his weight class in Australia. Vu is a decorated grappler who has placed in Grappler’s Realm Australia and Events BJJ tournaments. Vu is a crowd favorite with his all-action style and will look to replicate the style that made him a fan-favorite in his flyweight debut.

Anatpong Bunrad is a Thai flyweight currently residing in Belgium. Bunrad’s family moved to Belgium as a child but he maintained his heritage by picking up Muay Thai. He is also a black belt in Shihaishinkai Karate. Bunrad has set his sights on becoming the first MMA world champion of Thai descent and wants to achieve that goal in ONE FC. He made a successful ONE FC debut by finishing Marc Marcellinus with a liver kick last November.

Saiful Merican is a Malaysian Muay Thai practitioner and one of the most skilled strikers in the division. He has more than a hundred professional Muay Thai fights and possesses ferocious kicks that have knocked out many opponents. Nicknamed “The Vampire” by fans for his fast and intense style, he returns to the ONE FC cage to take on Anatpong Bunrad.

Ev Ting is regarded as one of Malaysia’s top MMA fighters.  Ting is of Malaysian Chinese ancestry but his family relocated to New Zealand when he was seven years old. It was an MMA highlight reel that he discovered on the internet that first sparked his interest in training in the sport, and he quickly found a home at Auckland MMA in 2009. After an undefeated stint as an amateur, Ting made his professional debut in 2011 after excelling as an amateur. Ting has won both his bouts in ONE FC and will look to keep the streak going when he takes on Cary Bullos.

Cary Bullos is the URCC Visayas Bantamweight Champion. He has finished all of his opponents in his seven victories thus far. The promising Filipino MMA stalwart is eager to get his first win in ONE FC and will look to spoil Ting’s homecoming.

Chan Rothana is a Cambodian Bantamweight with a background in Khmer kickboxing. He was the heavy favorite in the Cambodian Featherweight Grand Prix at ONE FC: RISE OF THE KINGDOM but came up short in the Final. He now gets the opportunity to showcase his skills against international talent and will compete outside his home country for the first time in his mixed martial arts career.

Ramon Gonzalez is a mixed martial artist from the Philippines. Gonzalez has vast experience in the Filipino martial art of Yaw Yan, and has recently into mixed martial arts. He will get a chance to showcase his talents on a global stage when he makes his promotional debut at ONE FC: AGE OF CHAMPIONS

Fans from around the world can witness the action online via live streaming at http://www.onefc.com/livestream. The event will be available for purchase at just US$9.99.

With a 90%+ market share in Asia, ONE Championship™ is Asia’s largest Mixed Martial Arts (MMA) organization.  Headquartered in Singapore, the world’s most exciting mixed martial arts organization hosts the best Asian mixed martial artists and world champions, all signed to exclusive contracts, on the largest media broadcast in Asia. ONE Championship™ has partnered with FOX and STAR Sports for an unprecedented 10-year cable television deal with a coverage that spans 70+ countries across the world.

Tune Talk is the fastest-growing Mobile Virtual Network Operator (MVNO) in Asia, officially launching commercial services in Malaysia in 2009. Our target is to provide super low rates and exciting incentives to the market. Our prepaid service offers voice, SMS, data and BlackBerry packages that meet the demands for a simple, value-for-money product with easy accessibility and a wide distribution reach. As a member of the Tune Group of companies, we have the advantage of providing a completely unique lifestyle service with offers by Tune Money, Tune Hotels, Tune Insurance, BIG Loyalty Programme and AirAsia. For more information, please visit www.tunetalk.com.

About Tune Group of Companies

TV9 is one of the four free-to-air (FTA) television stations under Malaysia’s leading media conglomerate, Media Prima Berhad. It was formerly known as Channel 9, and was rebranded to TV9, upon acquisition on 23rd September 2005. The station began broadcasting on 22nd April 2006. TV9’s target audience is the Young Fresh Mass Malays (YFM) between the ages of 15 to 29.

Its prominent and distinct image had propelled TV9 to retain its second spot as the most watched television station in Malaysia. Its successful formula includes catering to the specific tastes of its target audiences, presenting them with a variety of reality, entertainment, drama and telemovies as well as a mix of modern religious-themed programmes. For its viewers in Sabah and Sarawak, TV9 is available through Satellite TV Channel 119.