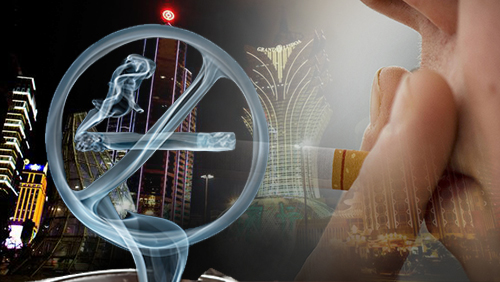 The Macau government is set to submit a bill to the legislature, proposing a full smoking ban in casinos including VIP rooms and airport-style smoking pods on mass gaming floors.

Macau’s Secretary for Social Affairs and Culture Alexis Tam Chon Weng announced, on Thursday, that the government plans to submit the bill in the first half this year.

Tam reiterated that the ongoing decline in Macau’s monthly casino gross gaming revenue would not be a hindrance in implementing a full smoking ban in gaming venues such as casinos and slot-machine parlors.

The policy secretary also said that the government would propose an increase in the tax on a packet of 20 cigarettes from the current 10 patacas tax per packet to 70% of the retail price, which would be in line with World Health Organization (WHO) recommendations.

On Wednesday, the Macau government announced that City of Dreams Macau had been fined for breaching the city’s ban on smoking in public places.

However, gaming operator Melco Crown Entertainment Ltd told GGRAsia that it will challenge the Macau government’s decision to fine CoD Macau with MOP100,000 (US$12,524) for allegedly failing to post “no smoking” signs in one area inside its casino.

“The company intends to pursue a judicial review of this matter to ensure proper implementation of the smoking regulations as they now stand,” a spokesperson from Melco Crown said. “Melco Crown Entertainment operates its casinos in compliance with Macau legal requirements and requisite governmental approvals. The legality of [the] government’s recent actions related to non-smoking signs is debatable.”

Analyst Karen Tang of Deutsche Bank suggests that the smoking ban in Macau VIP rooms will have a negative impact on VIP revenue.

“We estimate that the smoking ban on mass gaming floor since October 2014 had a 10-15% impact on mass gaming revenue,” Tang said. “If smoking ban is extended to VIP rooms in 2H15/2016, the impact on VIP revenue may be similar. Galaxy and Wynn Macau may be the most impacted given their high exposure to VIP (30-40% of EBITDA). Melco Crown may also feel a big impact as its recently-reclassified premium mass areas would also become non-smoking (35% of EBITDA).”